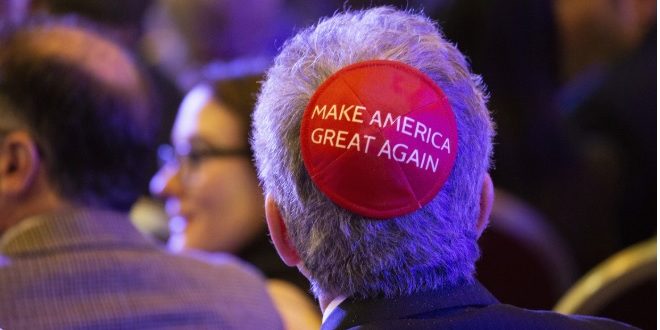 President Donald Trump warned on Saturday that a Democratic victory in 2020 could “leave Israel out there,” as he highlighted his pro-Israel actions in an effort to make the case for Jewish voters to back his re-election.

Speaking at the annual meeting of the Republican Jewish Coalition, Trump touted his actions to move the U.S. Embassy to Jerusalem from Tel Aviv and recognition last month of Israeli sovereignty over the Golan Heights, a strategic plateau that Israel won from Syria in 1967.

“We got you something that you wanted,” Trump said of the U.S. Embassy move, adding, “Unlike other presidents, I keep my promises.”

The group, backed by GOP megadonor Sheldon Adelson, supported Trump’s 2016 campaign and is preparing to spend millions on his 2020 effort.

“I know that the Republican Jewish Coalition will help lead our party to another historic victory,” Trump said. “We need more Republicans. Let’s go, so we can win everything.”

Trump earned standing ovations for recounting both the embassy move and the Golan Heights recognition.

Trump met privately with Adelson before speaking, according to an official. Adelson has cancer and has been in poor health, but he and his wife attended Trump’s remarks — receiving a standing ovation when they entered the ballroom. Continue Reading….