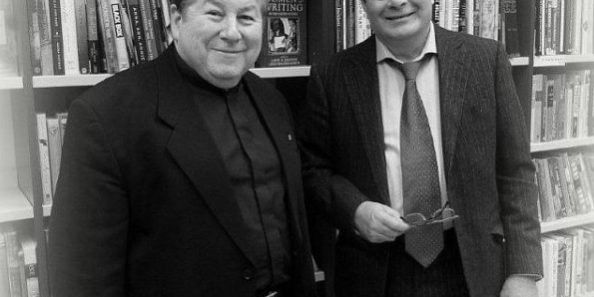 It was a beautiful, canonic ‘white Christmas’ evening behind the window, but totally misplaced in time, as it was the end of March in Vilnius. The capital of Lithuania is known for its mild climate, and normal spring was there just yesterday and will be again tomorrow. But not at the evening when we and our guests were mesmerised by non-stopping snowfall behind the windows of the elegant mansion build in early 1910s.

The tunes of beautiful music performed by talented pianist Maria Mirovska were taken us far in our thoughts. The soft light of stylish chandeliers warmed up the atmosphere. The hosts, the Ambassador of Finland in Lithuania Christer Michelsson, classy gentleman and the man of the world literally who worked from Madagascar to Azerbaijan, Moscow and Beijing including, his architect wife Ebba and us were waiting for the guests of the special reception they were so kind to organise. We all were to celebrate the one of our Foundation’s laureates, recipient of the Humanist of the Year 2018 Award from Lithuania, prominent film director Saulius Berzinis. Saulius is filming the various aspects of the remembrance of the Holocaust in Lithuania for thirty years by now. Too much material to handle, one can think. He himself said in his acceptance speech at the event that ‘to be frank, this work will never be completed. The material to handle is giant”.

It was hard to imagine that the one of the invited guests , the dear friend, would not come. That he would not come anywhere any longer. That was incomprehensible.

We are quite frequent comers to Vilnius which we call between us in an old Yiddish way, Vilna, continuing the treat from our both’ families. Vilna is Vilna, and it always will be Vilna for us. It is a part of the soul, sitting there effortlessly but firmly, with all its charm, wit, tragedy, poetry and real, deep, organic for us culture.

Practically every time when we were there, we would call Tolja, and we will meet. We would sit in his favourite Neringa restaurant, or some stylish caffe, we would walk along the embankment. Of course, we would come to his concerts – and we would be so glad for unmistaken success of our friend, always over-crowded halls, always seas of flowers for him, always that palpable love from general well-breed and seriously cultured Lithuanian public towards small man with disarming smile who was transformed when he was conducting orchestra into powerful strong figure as if made of steel, towards essentially Jewish composer Anatolius Senderovas who was admired by entire country that does not have the 96% of its Jewry any longer.

I was corresponding with Tolja just a few weeks before we would be coming to Vilna this time. He was telling me that he is in the USA, with his daughter, and that he feels weak and almost does not leave the house. We were worried, but hopeful. One always does against all odds, doubly so when a friend is in question. The friend who is not that elderly, too. Tolja was fighting cancer for four years by now, bravely and quietly. After successful operation, I’ve got an email from him signed Your Nathan. Receiving his life back, he has decided to take a Jewish name and to use it publicly. We’ve got the message.

He did reply very politely and dutifully to the organisers telling that he would not be able to participate at the event we were celebrating in Vilnius now. He did care about people, always. We felt sorry that we would not be seeing our friend this time. We felt concerned that our friend does not feel well, that he is weak. His presence was with us all the time during this visit to Vilna, even if we would not speak about it even between ourselves. Since the moment we found ourselves on the Vilna streets, I was thinking on Tolja Senderov non-stop, as if somebody inside myself was bringing him to my mind all the time. I did mention it to my husband at some point – to find out that it was the same for him.

We came for our morning coffee to one of the places in the Vilna Old Town, and when we sat down I’ve said to Michael: “Remember, we were here with Tolja the last time?” – Of course, I do”, – Michael replied, being in thoughts. We were driving in a taxi later and passed the Lithuanian Philharmonic Hall where we witnessed a triumph of our friend a few years ago. We were walking on the same streets on which we were walking with him laughing and talking, and his presence was so palpable, so tangible. And yet, we could not think about anything bad.

Late in the night, I saw his photograph on the Facebook feed. I was frozen in disbelief. We realised that the only trip our friend would be able to do now it would be in the form of ‘a special cargo’ in the flight from New Jersey back to the Jewish cemetery in Vilna which we have visited just yesterday. It was impossible to think about anything else.

And the nervous, tragic, beautiful melodies from many of Senderovas’ works started to whirl in my head – David’s Song, Sulamith Songs, music from Ghetto film, Fragments from the Forgotten Book – making that non-stopping humming nigun of farewell. I was thinking on the Michael’s painting that he created specially for Senderov’s 70th anniversary just a few years back, where all those melodies were present on the canvas which has a double-title, Symphony of Rain. The Life of the Jewish Music. That Rain is the Rain of Jewish tears, of course, but still being inter-vowen into our melodies, they are sparking as pearls. The essence of the Jewish perception of the world in general, and in its melodic version of the music which always is a nigun of our souls. Tolja loved the painting. ” It says everything!..” – he said to Michael so many times.

At our ceremony, I was inclined to speak about passing of the great Lithuanian Jewish composer in the end, but I knew that it would be hard to keep that order.

As it turned out, many of our guests and speakers were in the same state of mind and mood. The one of the leading European politicians from Lithuania, MEP Petras Austrevicius, the member of the International Advisory Board of our Foundation, in his greeting remarks at the beginning of ceremony have spoken about Anatolijus’ passing and the shock the news had caused for him. Shock was the general reaction in Lithuania and beyond, if to put it in one word.

I was leading the ceremony, and was glad to continue on the note, to speak about the memory of our friend, also member of our International Advisory Board, the holder of Lithuanian National Prize Tolja-Nathan Senderov. I felt at home to remember our friend, very kind man, deep personality, modern classic, the son of his people. The sudden snow-fall turned to be warm, indeed. Film director Saulius Berzinis with his Special Art Award at the Humanist of the Year 2018 of The Rogatchi Foundation. Residence of the Embassy of Finland in Lithuania. Vilnius, March 26, 2019. (C) Inna Rogatchi.

Many people present at the beautiful mansion which is the residence of the Ambassador of Finland in Lithuania had been present at the another special event there in Vilna a bit over seven years ago, in December 2011. That was an unique event, the opening of the Vilnius Jewish Public Library, the first time after the end of the Second World War. We did support the project to our best. My husband’s art work Yiddishe Sun ( Yiddish Son), the only one done in oil, on purpose, adores the library’s centre hall. My collection of fine art photography works Power of Light depicting Judaica Symbolism from our Judaica art collection, is on permanent display on the walls of the Library, a very special culture institution with intense, various and always top-quality international program or events, presentations and discussions.

In December 2011, at the event of its celebrating opening, there was also a music premiere of Senderovas’ The Fragments From the Forgotten Book. We all present there were taken by its depth, nerve, sincerity and beauty. Our friend Tolja has told us that the name of that stunning piece of music is literal. Among the Vilna Ghetto artefacts, there was indeed a book of old Yiddish melodies which has been found and which he had. The book itself was in a bad shape, but melodies there were speaking out. It was a real connection, a restored and uplifted connectivity of our souls, a memorable, singing legacy.

Every time we have heard The Fragments From The Forgotten Book – and we did it many times, in a grand concert, as well – our hearts were itching. I was always thinking that a person just cannot leave better present to its people than this kind of beautiful, painful and soulful musical legacy.

The next day after the passing of Anatolijus Senderovas in the end of March 2019, many people who were present at the premiere of that unforgettable music in December 2011, including the Ambassador of the USA in Lithuania HE Anne Hall, were remembering its creator with love and warmth. The theme of the inter-connection of souls had been present at this special event tangibly.

Before handing the Special Diploma for the Outstanding Contribution Into the Collective Memory on Holocaust to our laureate, my husband Michael, the chairman of The Rogatchi Foundation, has told to the distinguished audience: “We all have noticed and were taken by a total surprise by this very strange weather today. I think, I have an explanation to that. Our ( Jewish) Sages are saying that when a clean soul is departing This World, a very unusual natural phenomena occurs: powerful storm, mighty wind coming from nowhere, or sudden snowfall in the middle of spring, as we seeing it tonight. As the soul is raised to its level in the Next World, the unusual phenomenon continues. When the soul has reached its ultimate destination, the phenomenon seised. What we are seeing behind the window? The sudden snowfall has stopped now. So I believe that a pure soul which our dear friend Tolja had possessed, has reached its destination, and did it in a very short time, indeed”.

On the demonstration screen, there was an image of my Song of Our Souls art work which is addressing to those people who were among us and who are now living in a Higher Sphere. The new version of this work, Song of Our Souls II has become a Special Art Award to our laureate, film director Saulius Berzinis who has devoted his entire time during the last three decades to filming this inter-connection, to memorise the songs of those souls, to preserve the memory about them alive and make it available and existing, documented, breathing. To make a document breathing is a special talent. It takes the entire resource of one’s humanistic capacity. The effect of such effort is ever-lasting. And this is the point of it.

The beautiful sounds of the Schubert’s Impromptu were filling the hall lit with warm light from elegant chandeliers. Maria Mirovska, a talented pianist, behind the grand-piano was fighting her tears and emotions which were quiet but palpable during all that very unusual evening. The snowfall has stopped. The music stayed on. As always is the case when hearts are involved.