Israel’s Golan Sovereignty Should Have Been Recognized Years Ago 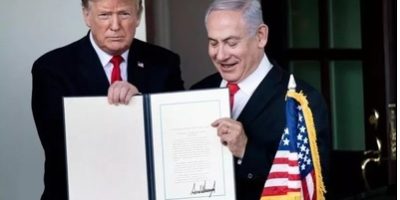 DURING A White House meeting with Benjamin Netanyahu on Monday, President Trump signed a formal proclamation that the United States recognizes Israeli sovereignty over the Golan Heights. In so doing, the president acknowledged a longstanding fact of life, bolstered a vital American ally, promoted stability in a deeply unstable neighborhood, and upheld the oft-ignored but crucial distinction between acquiring territory through aggression and acquiring it through lawful self-defense. Good outcomes all, extending the Trump administration’s already exemplary record when it comes to the Middle East.

Trump’s policy shift didn’t sit well with everyone, of course. Those angrily denouncing it included the dictators and terror-sponsors who rule Iran, Turkey, Russia, Syria, and the Palestinian Authority. A few reflexively anti-Trump editorial boards chided the president for a “pointless provocation” that will “damage US diplomacy.” Tellingly, though, there was barely any protest from most Arab governments, which in recent years have come to value Israel as an ally against Iran and its proxies. As a CNN headline put it, “Trump’s Golan Heights announcement met with a shrug in the Arab world.”

Trump’s announcement is being described as a pro-Netanyahu campaign ploy, but no matter who wins Israel’s upcoming election, the Golan will remain part of Israel. Which is why even Netanyahu’s political foes applauded the American announcement. Benny Gantz, the retired general hoping to become Israel’s next prime minister, publicly thanked Trump for his proclamation.

The president’s signature changes nothing on the ground. Israel has held the western two-thirds of the Golan Heights — a plateau that towers over the Sea of Galilee and much of northern Israel — since the 1967 Six Day War. That war, recall, was one of blatant aggression against Israel: Syria joined Egypt and Jordan in an assault that Syria’s Defense Minister Hafez Assad had labeled “a battle of annihilation” to “explode the Zionist presence” in the Mideast. Continue Reading….