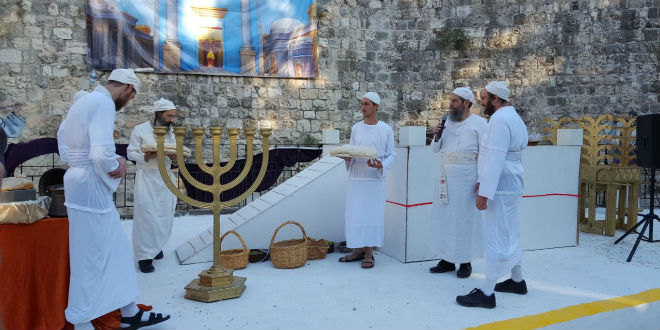 The nascent Sanhedrin issued an open letter to the president of the United States in advance of the announcement concerning his peace plan for the Middle East. Jared Kushner, Trump’s son-in-law and special adviser, is currently touring the region to garner support for the much-anticipated plan. Though details of the plan have yet to be revealed, it is believed that the plan will include establishing a contiguous Palestinian state in Judea and Samaria as well as a Palestinian capital in Jerusalem. The Trump Administration is expected to release its peace plan following Israel’s elections on April 9.

“To the honorable President Donald Trump, The Beit Din of the Sanhedrin, the High Court of 71, would like to express its appreciation for all you have done for the People of Israel, for the State of Israel, and in particular your formative action in moving the US Embassy to Jerusalem.

At the same time, we are very concerned about the implications of the so-called “deal of the century ” that has not yet been presented to the public but has already been announced. The plan received considerable attention from Israeli officials, including Prime Minister Netanyahu. We assume that not everyone is wrong and we are convinced that you have truly good intentions to make peace. However, peace can only be achieved if it is not contrary to the will of the Creator. And it follows that peace can only be implemented by whosoever decides to ensure that all of land mentioned in many places in the Bible are granted as an eternal inheritance to the people of Israel, the seed Abraham Isaac and Jacob.

We ask you and your government not to present any plan that violates the Divine rights of the people of Israel to all of its land, the Land of Israel.

The Creator of the World did not grant any rights of settlement in the borders of the Holy Land to other nations, and certainly not to the enemies of the People of Israel. If you act according to these principles you will be guaranteed the blessing of the Beit Din and the Blessing of Heaven. Accordingly, your terms of office will be filled with success, both for you and for the United States of America.” Continue Reading….