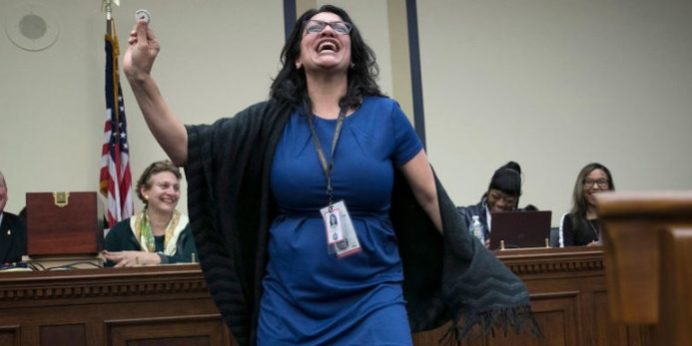 A newly sworn-in congresswoman has already made waves, using foul language to threaten to impeach the president and reversing her campaign platform to the dismay of her Jewish supporters. This should come as no surprise since Rashida Tlaib is the country’s first Palestinian to sit in the House of Representatives.

Tlaib, the first Palestinian Congresswoman representing Michigan’s 13th Congressional district, was sworn in on Thursday but has already made several controversial moves. Tlaib was sworn in on an English-language Koran, a 1734 English translation that belonged to Thomas Jefferson. Talib claimed that her choice was intended to illustrate how Islam was integral to the founding of the U.S. An article in the Forward ironically noted that the Jefferson Koran was created to aid in missionizing Muslims.

“While the translator George Sale wasn’t in favor of forced conversion, he did view Islam as foreign, and his introduction is often read as an example of the religious fear, misunderstanding and intolerance of the era,” the Forward noted.

The introduction to the Jefferson Koran reads: “Whatever use an impartial version of the Korân may be of in other respects, it is absolutely necessary to undeceive those who, from the ignorant or unfair translations which have appeared, have entertained too favorable an opinion of the original, and also to enable us effectually to expose the imposture.” Continue Reading on BIN—