Jesus, the Temple and an Ancient Weight Stone 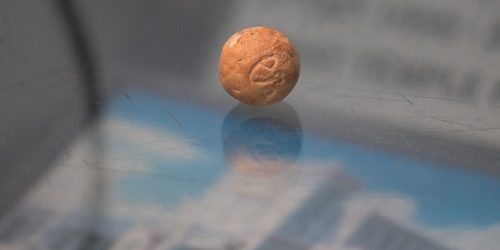 “An amazing archaeological discovery.” This is how Prime Minister Netanyahu called the recent discovery of a 3,000-year-old beka stone used for weighing a half-shekel worth of silver. The little weight stone was found during on-going excavations at the foundation of the Western Wall. Obviously, Netanyahu is using this finding as an opportunity to debunk the false Palestinian narrative that traces their origin not to the Arabian Peninsula, but to one of the nations of ancient Canaan, like the Philistines and the Hittites.

The tiny stone inscribed with the inverted Hebrew “beka,” is one only a handful of First Temple-period weight-measuring stones ever found, and the only one found with its inscription intact. It was found thanks to the Emek Tzurim Sifting Project. This volunteer-based project recovers archeological artifacts from 400 truckloads of topsoil removed during the 1996-1999 construction of the huge new underground el-Marwani Mosque built in the space known as Solomon’s Stables. This illegal digging by the Muslim Waqf, which Israel did nothing to stop, was supposed to erase any Jewish connection to the Temple Mount. Continue Reading….