The Spiritual Significance of Anti-Semitism 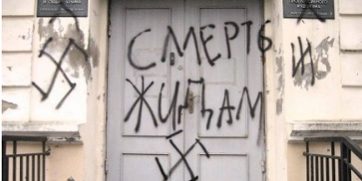 According to the Anti-Defamation League, the number of reported anti-semitic incidents in the United States was 57% higher in 2017 than in 2016.

The data for 2018 are not yet in. Unfortunately, the massacre at the Tree of Life Congregation in Pittsburgh last month, in which 11 Jewish victims were killed by a lone gunman, suggests that 2018 will also show a dramatic increase.

Jerusalem-based author and Torah educator Rabbi Shimon Apisdorf connects the uptick in antisemitism with geula (the End of Days).

He told Breaking Israel News, “What is unique about anti-semitism is that it is eventually about the desire to exterminate the Jewish people. It’s not just prejudice or racism. It comes down to extermination.

“The guy in Pittsburgh said it really clearly. I don’t know if anyone ever said it more clearly. ‘All Jews must die.’ That’s what he said. He nailed it.”

If the message of antisemitism is that all Jews must die, Apisdorf asks, “What is it about Jewish life and the existence of the Jewish people that is vital? What is the meaning of our existence? That’s the mirror being held up by anti-semitism.” Continue Reading…