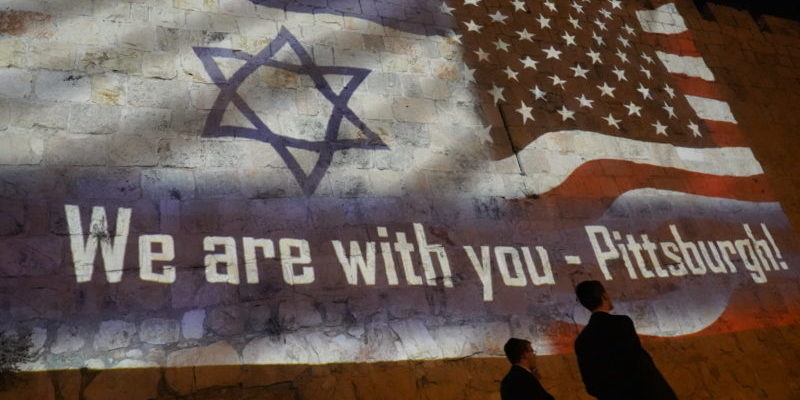 Eleven Jews were murdered in the Tree of Life congregation shooting Saturday evening when Robert Bowers entered the Pittsburgh synagogue and began to seek out and kill any Jew crossing his path. For hundreds if not thousands of Pittsburgh’s Jewish residents, this event will be a life changing event with personal and collective ramifications for the years to come.

For many their own personal trauma will become evident almost immediately, what was, will no longer be. Family, work, and personal relations will all be affected and for the worse. Re-occurring intrusive memories will accompany daily routines, nightmares, depression, anxieties, will be an integral part of their daily lives. They will seek professional attention, for many, they will need medications to get on with their lives. For others, what will seem to be a successful adjustment to this life changing event; their reactions will be late in emerging as if out of the blue. They will not be aware of what triggered their late reactions, maybe weeks later, maybe months later, maybe during the major holidays when they enter the Sanctuary of their Synagogue, or even in response to a seemingly unrelated event. This is the trauma and extended bereavement that awaits them with certainty.

The Jews of Squirrel Hill and the surrounding Jewish communities are innocent victims of a heinous unprovoked anti-Semitic attack, they did absolutely nothing that can be construed as a provocation that lead to this killing spree. The same cannot be said for many of our American Jewish brethren who did not lose a second in placing the blame unequivocally on President Trump, and essentially all those that don’t toe the line of the progressive leftist agenda of American Jewry.
Jewish-American writer David Simon slammed Prime Minister Benjamin Netanyahu on Twitter, claiming Netanyahu aided US President Donald Trump to be elected and that, in turn, enabled the rise of American fascism. In response to a tweet by Diaspora Minister Naftali Bennett, who flew to Pittsburgh in support of the Jewish community, Simon wrote that the minister should “Go Home.” “Netanyahu’s interventions in US politics aided in the election of Donald Trump,” wrote Simon, who argued that the US President provides “raw and relentless validation of white nationalism and fascism.” Simon further wrote that “the American Jewish community is now bleeding at the hands of the Israeli Prime Minister.”

This is the knee jerk response by Progressive Jews. Blame Israel. Blame Jews. Blame Trump. These responses are exclusively part and parcel of Jews belonging to the progressive left. Chandra Prescod-Weinstein, a researcher at the University of Washington, used the attack in Pittsburgh to make it about “white” Jews. “I hope white Jews who are feeling especially unsafe today realize that Black people feel vulnerable like this all the time,” Prescod-Weinstein said. “We are born into it. Allow your grief to teach you empathy and move you to pursue justice and an end to the violence that is whiteness.” To single out “white Jews” and lecture those with grief to have empathy is highly similar to the empathy afforded to Palestinian Arab terrorists who murder innocent Israeli Jews.

For the latter part of the last two decades, the progressive and vocal leftist leadership of American Jewry, in their world of “enlightened” opinion, has shed no tears for the thousands and tens of thousands of Israeli Jews who have been murdered or wounded by the savagery of Palestinian Arab terror because in some way the Israeli’s were asking for it. Whether it be Netanyahu, or the Likud, or the so-called “occupation”; as far as they are concerned, the Jews got what they deserve. These progressive American Jews have excused Palestinian Arab terrorism against Israeli civilians for years again and again with no remorse or regret, thinking that there will never be a spill-over effect against Jews in other countries. They take it for granted that Israeli Jewish behavior or cruelty is the source of the primal rage against Jews in the Muslim world. Of course, the Jews are responsible in some way or another according to this mindset.

This inexcusable need on the part of progressive leftist American Jews to ignore blatant and ever increasing anti-Semitism on the part of Palestinian Arabs and Muslims in general has directly contributed to the leap of anti-Semitic beliefs over the Atlantic from the Middle East to the American continent. According to the FBI anti-Semitic incidents accounted for half of religious hate crimes in the United States during 2014-2015 before President Trump was even elected and 11 % of all hate crimes in 2016. Why the silence in response to these terrifying statistics, could it be because Muslims are involved in perpetuating these hate crimes, could it be due to this occurring during Obama’s watch. Only recently, a stage shared by the rabid anti-Semite Louis Farrakhan, ex- President Bill Clinton, and other Afro-American notables without a word be said to condemn anti-Semitism. Instead we heard only silence on the part of the progressive leftist Jewish leadership.

Linda Sarsour has worked closely with left-wing Jewish groups including Jewish Voice for Peace and Jews for Racial and Economic Justice, despite widespread characterizations of her beliefs as anti-Semitic coupled with antipathy for Jews in general. The Anti-Defamation League, along with the president of the Zionist Organization of America, have criticized her stance on Israel claiming that Sarsour’s support of BDS “encourages and spreads anti-Semitism”. This has not preventing the American Jewish progressive leadership from embracing her and joining hands giving their support to Sarsour publicly as well as financially.

The anti-Semitic thread tying together the likes of Farrakhan, Sarsour, and Bowers has to do with their effort to dehumanize Jews whether in Israel or in the United States. Bowers referred to a “kike infestation,” and it turns out Farrakhan has claimed he’s not just an “anti-Semite” but “anti-termite.” Same terminology. Same message.

So rather than blaming President Trump or Prime Minister Netanyahu, progressive Jews must begin to understand that in the age of social media in which murderers like Robert Bowers, spend much of their leisure time in social media being inundated with anti-Israel and anti-Jewish content that has its origins with the very associates and members of the progressive Jewish left. They need to attack not only those on the other side of the political isle but also those anti-Semites on their side of the political isle who perpetuate and expand social media content that makes its way to anti-Semites everywhere. You only need one to take these messages one step further and walk into a Synagogue on Shabbat.

The writer, a 25-year veteran of the I.D.F., served as a field mental health officer and Commander of the Central Psychiatric Military Clinic for Reserve Soldiers at Tel-Hashomer. Since retiring from active duty, he provides consultancy services to NGO’s implementing Psycho trauma and Psychoeducation programs to communities in the North and South of Israel and is a former strategic advisor to the Chief Foreign Envoy of Judea and Samaria. Contact: medconf@netvision.net.il