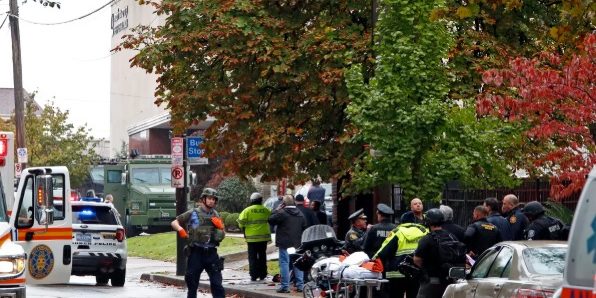 “No weapon that is formed against you will prosper” (Isaiah 54:17)

The Sabbath murder of eleven Jewish men and women in Pittsburgh caught many by surprise. Robert Bowers, a 46 year old neo-Nazi racist who posted anti-Jewish and anti-Trump conspiracy theories on the web, walked in to the Tree of Life-Or L’simcha synagogue in the Squirrel Hill district and unloaded clips from a semi-automatic rifle and a handgun at Jewish worshippers, while yelling out “All Jews must die!” and other anti-Jewish curses. He murdered 4 people in the main sanctuary and then moved up toward the Rabbi’s study on the next floor, where he shot 4 others.

Three different Jewish congregations were each conducting their own services in the facility at the time, with nearly 100 gathered in the building. A family was having a bris (circumcision ceremony), bringing their eight-day old baby boy into the Covenant of Abraham according to Genesis 21:3-5 and publicly announcing his name for the first time.

Police and SWAT teams attempted to rescue the congregants. Four policemen were injured by Bowers’ gunfire, one critically. The gunman was moderately injured by return fire and eventually was apprehended by law enforcement units.

How can we make any sense out of the travesty of these eleven murders?

Squirrel Hill is a quiet largely Jewish community in Pittsburgh. Its graceful trees and brick homes give way to small storefronts, including Judaica bookstores, synagogues and temples. My wife and I were married many years ago only a few blocks away from where these murders took place. The host of children’s television program Mister Rogers’ Neighborhood Fred Rogers lived in Squirrel Hill, three blocks away from Tree of Life. He would attend Sixth Presbyterian Church, a ten-minute walk from there.

This attack is the largest mass casualty event involving Jewish people in the U.S. (https://edition.cnn.com/2018/10/27/us/jewish-hate-crimes-fbi/index.html) apart from 9/11, although many Jews were murdered in Manhattan that day. The Twin Towers terror attack was jihad-motivated violence directed against Americans as a whole.

The rise of hate crimes against America’s Jewish population is a real and present danger.

Half of all USA hate crimes target Jewish people.

Anti-Jewish hate crimes increased by 60% in 2017. There were 1,986 anti-Semitic incidents reported across the United States in 2017, a 57% increase over 2016’s 1,267 incidents. Incidents were reported in all 50 states for the first time in at least a decade (www.adl.org/news/press-releases/anti-semitic-incidents-surged-nearly-60-in-2017-according-to-new-adl-report).

Going back one year to 2016, religious bias hate crimes were directed with priority against Jews and only then Muslims (https://ucr.fbi.gov/hate-crime/2016/topic-pages/incidentsandoffenses).

Instigators of these hate crimes can be found in jihadi-influenced communities, in neo-Nazi, White Power and Christian Identity streams, in Black supremacist and Black Power movements, and in anti-Israel and anti-Zionist movements. They can be found on the edges of most political parties in the USA.

Anti-Semitism is not theologically neutral

Zechariah the prophet reveals an astounding spiritual experience that he had on Yom Kippur, the Day of Atonement. “He showed me Joshua the High Priest standing before the Angel of YHVH, and Satan standing at his right hand to accuse him. YHVH said to Satan, ‘YHVH rebuke you, Satan! Indeed, YHVH who has chosen Jerusalem rebuke you! Is this not a brand plucked from the fire?’” (Zechariah 3:1-2).

On the most solemn day of the Jewish calendar, Satan appears before the God of Israel, accusing Joshua the Kohen Gadol as he pleads with YHVH for Israel’s forgiveness and atonement. The God of Jacob describes Himself here as ‘YHVH who has chosen Jerusalem.’ The satanic accusations and physical attacks against the Jewish people (whom God has chosen irrevocably – see Romans 11:28-29) actually underscore the validity of Israel’s divine chosen status.

Shooting into the eye of God

From the Biblical perspective, the most important issue about someone who attacks the Jewish people is not necessarily his or her religious or political beliefs. Zechariah directly quotes the God of Israel on this matter: “For thus says YHVH or armies, ‘After glory He has sent me against the nations which plunder you, for he who touches you, touches the apple of His eye’” (Zechariah 3:1-2).

This is the common spiritual thread between:

a Hamas terrorist who explodes a bomb on an Israeli bus
a neo-Nazi who sprays automatic fire in a synagogue
a leader of an African-American movement described Jews as “the so-called Jews are not Jews, but are Satanic people” (http://thejewishvoice.com/2018/05/30/nation-islam-leader-louis-farrakhan-ratchets-anti-semitism-latest-rant/) or “Satanic Jews who have infected the whole world with poison and deceit” (www.jpost.com/Diaspora/Farrakhan-compares-Jews-to-termites-says-Jews-are-stupid-569627)

Spiritual warfare is being waged by Satan (Hebrew for ‘the accuser’) against the people whom God has chosen to declare His praises (Isaiah 43:21). These attacks show that this anti-Jewish warfare is increasing, and even Main Street USA is not exempt from this monster.

The spiritual and moral foundations of America have been slowly eaten away over the decades by a departure from godly behavior and a descent into corrupt ethics. The original hope that God would shed His grace on America has been overshadowed by a materialistic and narcissistic culture which has relegated the God of Jacob to the back seat of the car. This out of control vehicle is careening around dangerous corners. The people of the God of Jacob are feeling the encroaching threat.

The theology of contempt leads to the practice of murder

The Squirrel Hill murderer filled his web postings with vicious screed against Jews, Trump and many other targets. He even quoted from the Gospel of John (8:44), “You are of your father the devil,” blusteringly concealing his deadly racism behind the twisting of Scripture. In that passage Yeshua speaks warmly of the Jewish people who followed Him and believed in Him (verses 30-31), and of the many Jewish people who eagerly heard and accepted His teachings (8:2).

But Robert Bowers had evidently picked up anti-Jewish perspectives which float around some Christian circles, whether it was Replacement Theology or the medieval ‘deicide charge’ – what Dr. Jules Isaac has called ‘The Teaching of contempt: the Christian roots of anti-Semitism” (www.amazon.com/teaching-contempt-Christian-roots-anti-Semitism/dp/B0007DNNKO). See also Father Edward Flannery’s “The Anguish of the Jews” (www.amazon.com/Anguish-Jews-Twenty-Three-Centuries-Antisemitism/dp/0809143240).

In his own day Hitler referenced Martin Luther in justifying the Nazi genocidal campaign against the Jews:

In a similar way, Bowers probably made place in his heart and mind for satanic lies which came embedded in whatever Christian teaching he had been exposed to, whether in a church setting or in neo-Nazi meetings.

The birthpangs of the Messiah

Some rabbis describe a future time before the coming of Messiah as ‘the birth pangs of Messiah’ (hevlei Mashiach; see TB Sanhedrin 98b, TB Shabbat 118a). They are probably reflecting what Messiah Yeshua had spoken of centuries earlier in Matthew 24 (see verses 3-14):

“Because lawlessness is increased, most people’s love will grow cold… But all these things are merely the beginning of birth pangs” (Matthew 24:12, 8)

The increase of lawlessness combined with the growing coldness of men’s and women’s hearts indicate that these prophesied days are coming upon us. The spread of anti-Jewish hatred and hatred of the Jewish state are two solid benchmark indicators of these times.

Yeshua encouraged us about these days: “But when these things begin to take place, straighten up and lift up your heads, because your redemption is drawing near” (Luke 21:28).

Sifted but not consumed

Moses and Amos spoke prophetically about Jewish history, declaring that Jacob’s children would go into Exile and undergo harsh judgment among the nations (see Deuteronomy 28:15-68; Amos 9:8-10). Yet even after these terrible events, YHVH would regather His people and return them to their Promised Land (Amos 9:14-15). The Jewish people have been scattered across the face of the globe (James 1:1; 1 Peter 1:1), from the Amazon to America, and from Canada to China. This is not just a Diaspora, a Dispersion; it is truly an Exile (Deuteronomy 30:1-6). Even the wonders and comforts of America are coming to an end. It is time for Jacob’s children to start lifting their eyes to Zion.

“YHVH is a man of war; YHVH is His name” (Exodus 15:3). The God of Jacob is a defender of His people (see Isaiah 59:15-20). His warlike return to Jerusalem is described with strong prose in Zechariah 14:3-9. The Day of the Lord will be a day that causes the enemies of Israel to tremble, and there won’t be anywhere to hide.

In that day, the promise God gave to the Jewish people will be fully realized: “No weapon that is formed against you will prosper, and every tongue that accuses you in judgment you will condemn. This is the heritage of the servants of YHVH, and their vindication is from Me, declares YHVH” (Isaiah 54:17).

We are not yet in the fullness of that day. There are still many birth pangs to endure. Let us run the marathon, in prayer, in intercession, in standing with the Jewish people and standing up for the Jewish state as the darkening clouds gather.

How should we then pray?

Your prayers and support hold up our arms and are the very practical enablement of God to us in the work He has called us to do.