The price of a handshake 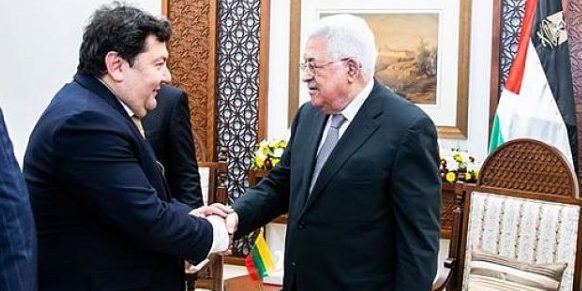 The photograph came out as a bolt. A well-known international politician of a Jewish origin, the man you know for years, in a awkward, embarrassing hand-shake with the PLO boss. The man you know for years is all sugar despite the PLO boss’s contempt against him which screams of the photo. The man you know for years is all the effort to emit and to transmit his good will to the boss of terrorists and murderers who praises them regularly and who pays them wages for murder till the rest of their lives, a kill-stipends; to the vicious, consistent Holocaust-denier who had his Phd thesis at the Soviet university back in 1970s on that very theme and never changed his sick and dirty phrasing on the matter. Just how small one has to be to go on for that? And what for?

The man you know for years have had to explain himself, after a stir caused by a poignant photo. He did it personally, additionally to the press-conference held by the political delegation of his country that visited Israel recently in the visit that had many eye-brows raised after it. The delegation’s visit to Israel and their proposal to the PLO to open their representative office in Lithuania has caused a stir, too, hence the press-conference was called it. I am not that much interested in the delegation, their visit, their formal attendance of the Yad Vashem, their cordial rush to Ramallah or their stupid servile proposal to serve PLO by hosting them in their country. They had their voters to care for that. I am interested by the behaviour of the man whom I know for many years, by the Jewish man I have met at all and every ceremonies and commemorations of the Jewish cause and in the memory of the Holocaust. I am just curious: how elastic a human character can actually be?

So, the man I know for many years comes on with his personal explanations he feels he ought to public, and perhaps to a few people who know him as a Jew. In his explanations, he states that ‘none of the Israeli officials had objected’ the visit of the official delegation of the Lithuanian parliament to Ramallah; he has a gut to mentor his critics on ‘necessity to distinguish between Fatah and Hamas’; he insists that the idea of setting up the Palestinian representative office in all three Baltic states in the Lithuanian capital, with providing the land for that to the Palestinians, without recognising them as a state by the Lithuanian statehood of which he is a known member, is ‘a positive initiative’ that ‘leads towards the peaceful co-existence between Israel and Palestinian..’ – who? The difficulties in formulation are obvious in the politician’s statement.

I can help to the man I knew for many years: he is speaking on what in fact is the Palestinian terrorist body which indoctrinates, educates, motivates, exalts and pays to terrorist beasts who are murdering Jewish people for profit. And this is not Hamas. This is Fatah as we know it. As people in Israel know it daily, not in a brief visit with photo ops with the instigator of the non-stop terror and murders of the innocent, good, talented, devoted people, patriots of Israel, Jewish people -,as the man whom I knew for many years himself is. The man whom I personally refuse to know, for the record, after his servile hand-shake with Abbas, after that sugar smile, and after his empty public statement. After that subduction to evil.

To state that one has to differentiate between Fatah and Hamas is not just naive. It would be permissive for those who are not in the known, and I can guess – knowing them personally, as well – that the speaker of the Lithuanian parliament or his colleagues who were visiting Israel in that back-fired visit might not be quite in the known, or in a full known, at least. But not the man whom I knew for many years. He is smart enough, and he knows matters well enough. To say publicly things like he decided to say now on necessity to differentiate between Hamas and Fatah – against the background of the vicious terror instigated, praised and paid for by Fatah -, is cynical and prepostrous.

It also projects sheer cowardice, as it usually does, from Munich-1938 model and many things alike, and it is seeing so utterly well in that photo that the Lithuanian politician of the Jewish origin is so proud about.

This photo has fixed the moment of utter shame. You, my former friend, shook the hand , with such outpouring enthusiasm, with that sugar smile on your face, with this servitude in your body language, of the beast who professionally denies the Holocaust since his youth, since 1970s. You and I have met at so many occasions during those years, many of them in Ponary. You customarily cry there , and at any other commemoration, too. But I am not buying any of your emotions regarding the Jewish cause any longer – for the record, too.

Members of my extended family are lying there, in those semi-open ravines, among more than 70 000 Jewish people murdered by the Nazis and their Lithuanian local very enthusiastic collaborators, members of my and my husband’s Litowsky, Pinsky and Chigrinsky families. How about members of your family? How about the friends of your family? For what reason did you set up the Museum of Tolerance in Lithuania? To end up by shaking the hand of Abbas – and to try to justify it publicly, with this stupid demagogic aplomb full of empty words of a professional politician? How despicable.

There is a classic case in the modern history of Israel – and the Jewish people world-wide – of the real reason behind that very abrupt in motion resignation of Menachem Begin. The timing of the resignation and the way in which Begin proceeded with it, quiet and subtle , but absolutely determined, had stunned his cabinet. Before that moment, Begin was standing in his office, his face towards the window, for a long time. He had a strange smile on his face. The smile that people who were with him in the room – and I know about it from them – could not quite get until he stated to the cabinet on his decision to resign now, immediately.

It was the morning of the afternoon of the first ever official visit of the state delegation of Germany to Israel. In the prospect of the afternoon, Menachem Begin would find himself in the position of necessity to shake hand with the Chancellor of Germany Helmut Kohl. Begin preferred to resign. I love him for that. I deeply respect Menachem Begin in general. But for his resignation and the reason of it, I do love the man – who is and always will stay in history for his noble Jewish spirit, his indisputable courage, his brilliant intellect, for his descent erected back. And for his refusal of a shake-hand. Because shake-hand matters – for those for whom a word ‘decency’ has a meaning and is not a cheap demagogy of a real-politics and simply small men.

The shameful behaviour and demagogic futile statements of the internationally known figure we witnessed is typical for the current European policy towards Israel in general. Nothing knew there. The fact that the person is quite well known in the international Jewish circles and is an active member of it makes the whole episode repulsive.

So the next thing to do for the man I knew for many years is to kiss Corbyn. Why to bother with hand-shakes any longer? He can do it in any way he likes, knows and understands the best. Like those iconic kisses of Brezhnev and Honecker, for example. He obviously feels at home in that set of modern history.

When a person makes his choices, he is not only building a reputation for himself, but also is supposed to make a millieu for his social acceptance. The man I knew for many years since now on will have a serious problem with who would be willing to shake his hand. For the rest of his life. Such is the price of hand-shakes.