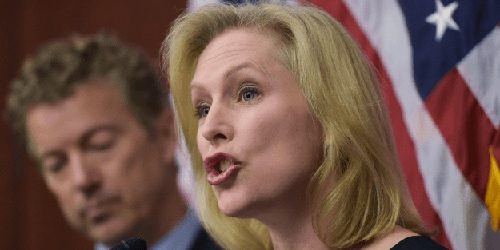 Kirsten Gillibrand, the New York Senator running for reelection, has advanced troubling views, legislative decisions and associations that evidence an alarming ideology when it comes to support for America’s only democratic ally in the Middle East, the State of Israel.

In recent years, Gillibrand has seemingly moved away from traditionally mainstream Democratic politics when it comes to bipartisan support for the Jewish state. Below are five reasons Gillibrand is dangerous for Israel.

1 – Gillibrand broke from the mainstream of the Democratic party when she withdrew support from the “Israel Anti-Boycott Act,” which opposes the anti-Semitic Boycott, Divestment, Sanctions (BDS) movement targeting Israel.

The bipartisan bill would impose monetary penalties on those working in an “official commercial capacity” who support any international government’s efforts to boycott Israel.

Gillibrand withdrew her support for the pro-Israel legislation after meeting with the heavily George Soros-funded American Civil Liberties Union (ACLU) on the matter and her initial sponsorship for the anti-BDS bill was questioned at town halls by such radical anti-Israel groups as Jewish Voice for Peace and the U.S. Campaign for Palestinian Rights, both of which support the BDS movement. Continue Reading…