7,000 Evangelicals From Around the World March in Jerusalem Awaiting Jesus’ Return 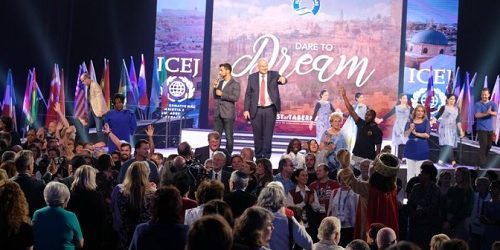 Nearly 7,000 evangelicals from over 100 different countries marched in Jerusalem Thursday as part of a celebrations looking forward to Jesus Christ’s return.

The Jerusalem Post reported that the annual Feast of Tabernacles drew locals and foreigners in an celebration of music and flags, with the largest delegations coming from Brazil, with 900 members. Another 500 people came from the Ivory Coast, outnumbering even the U.S. congregation.

Evangelicals from the U.K., the Philippines, South Africa, and many other countries were also present.

The event, organized by the International Christian Embassy Jerusalem, presents itself as a glimpse of the future, when the Bible says that the world’s nations will be united in Jerusalem.

“During the Feast of Tabernacles, or Sukkot, the Jewish people were to gather together in Jerusalem not only to remember God’s provision in the Wilderness but also to look forward to that promised Messianic age when all nations will flow to this city to worship the Lord,” the website states. Continue Reading…