Wrong, Wrong, and Wrong: Decrying the Murder of Ari Fuld 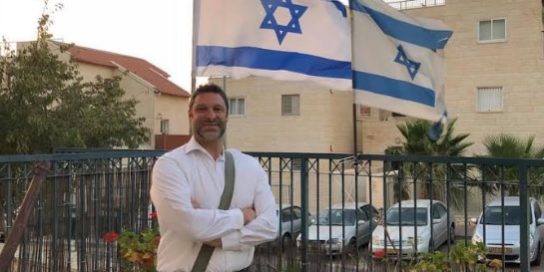 Who said that they do not follow our calendar? Ever so often the despicable murders by the Palestinian terrorists of innocent Israeli people, children, teenagers, rabbis, teachers, housewives are committed on or close to Shabbat or our holy days.

Our New Year 5779 have just started. And two days before Yom Kippur Ari Fuld, dear friend of so many people, the real lion of Judah, the one of the best of us, has been murdered in another vicious attack by the Palestinian terrorist, that 17-years old beast trained and indoctrinated by the bestial system that is run and executed by criminals, and nothing else but criminals.

From the footage of the attack, it is quite clear that it has been not a random accident. It quite possible that it was targeted killing, premeditated murder. Ari was very well-known and always on front-line.

45-years old, father of four, courageous, motivated, articulated, devoted, great Jewish man who loved his country, his land and his people. It is enormous loss for Israel and Jewish world. And it is just absolutely surreal who knew Ari. I am struggling with the reality and it does not come to me, not at all.

There is another heart-breaking video of the attack which shows how being fatally wounded by the terrorist, Ari, the hero, run after him, and shot the terrorist, then glances on his watch in semi-automatic move of the man in action, and collapses seconds after.

It is just incomprehensible to think that of all people, Ari is gone, being murdered. Ari was always to defend, in big and small, day and night, literally and metaphorically, at home and abroad, in all kind of action. And now, two nights before Yom Kippur, his family and friends would be weeping slichot, so literally so, at his fresh-made grave at Kfar Etzion.

And what about the terrorist? Slightly wounded, he was rushed to the Hadassa hospital in Jerusalem and is treated in the Israeli hospital by the Israeli doctors. Now, this is wrong. It is utterly wrong.

The primary value of Judaism is human life. Human, not the creatures who are breed to commit animalistic crimes, having far-cry criminal psychology and mode of behaviour. Who are cold-blood terrorists, would they be seventeen or seventy. The value of human life would not be valid per definition if those who murder people for business would be treated equally with their victims. This is absurd. Terrorists does not have human rights. When the state of Israel implemented this only one logic policy, Israel was perceived and treated in the world substantially differently. And Israeli people were not slaughtered so casually in their own country.

But it is not about how anybody treat us. It is about how we treat our people – and our enemies. Sworn enemies who are killing Jews for both business and pleasure having receiving those disgusting ‘stipends’ for years thus turning terror into profitable business. In the Jewish state. On the Jewish soil. This is wrong. Absolutely wrong. And it shall not be tolerated, not just the ongoing terror against the Jewish people on the Jewish soil, but the attitude and policy towards it.

How on earth a few appointees who are enjoying a king-like status in the life of modern Israel , who had been parachuted above reason and anything else, are allowed to demand from the IDF creation of a special body which would be designated specifically to consider legitimised by the Israeli legal authority requests from the terrorists who are sentenced to life in prison for the most atrocious crime to shorten their sentence? This is not a democracy. This is not even a mockery of the memory of all the victims of terror and their victimised families. This is insult to basic moral values – and because of it, it is screamingly, outrageously wrong. Yet better, we have heard about it at the morning of the day Ari Flud was murdered.

There are so many wrongs which are evoked in connection with this vicious crime and which are screaming in our ears – no, hearts – powerfully. It is wrong to allow the attacking and attacked terrorists to live, but the military and security personnel is cautious for a good while to shot and kill – as it would be the case anywhere in the world – due to the wrong pressure onto them to restrain beyond reasonable.

It is wrong to send the convicted terrorists to comfortable prisons where they are enjoying life really, putting on weight, socialising, having feasts among the other beasts alike, having a great time there, communicating with the outside world easily against all odds and pronounced restrictions. It is wrong to allow them ‘ to study’, to become MBAs and authors. It is insane, it is against, not for human rights. And this-is-wrong.

And most and foremost it is wrong not to implement the capital punishment for terrorists. It is a long, long over-due to introduce it in the state of Israel. Very much because of this unpardonable leniency terror has become a routine, and that evil routine knocks down the best of our people, the symbols of Israeli strength as Ari was, with a joke-like ‘punishment’ following. The backbone of morality has been broken by this real-politic effective surrealism. And when backbone of morality is no anymore, life has becoming a parody of its own. A very bitter, very painful situation, unnecessarily so.

Two days before Yom Kippur in our just started new life circle, Israel did lost the one of its best sons, indeed. Ari was not only great soldier, he was also beloved teacher, engaging guide, devoted believer. He was an ultimate Mensch. The most wrong, impossible word here is ‘was’.

In human life, it is very telling how many friends you have and who those people are. In the case of Ari Fuld, there is an army of his friends, fantastic people of their own, sons and daughters of Israel, many of them have had the one of the most difficult, stone-heavy night of their lives saying Kaddish to Ari at the cemetery in Kfar Etzion.

It is natural for friends to help to the family, and many people now are making this mitzva, the only immediate thing which they could do for the Fuld family collecting money to support them – the link is here – https://www.israel365fund.org/en/projects/arifuld/. I do hope that the Israel state would support the family, as it should. It would be utterly wrong not to do so.

There are people who you refuse to get as murdered, so much of defenders and great soldiers they were – as Ari was. This is very kind of the people who Israel needs the most and foremost. It is wrong for this kind of people to leave This World prematurely. It is absolutely wrong to allow the situations in which this kind of people can be taken from our midst forcibly, by the way of murder.

This Yom Kippur will be full of real-time pain.

Among all those photos of Ari’s posted all over social and the other media there is the one which breaks my heart. Ari is standing there smiling to us, next to his house, just before Shabbat, in white shirt, with his tsisis and his gum-machine over his shoulder, with two large Israeli flags flying over his head in the time of Shabbat arrival in the sky of Israel which was his everything. It was taken a day and a half before his life had been ended.

Our deepest condolences and love to Ari’s family. We are with you. And Ari is with all of us and with his beloved Eretz Israel.