The Democratic Socialists of America and Their Anti-Semitism Problem 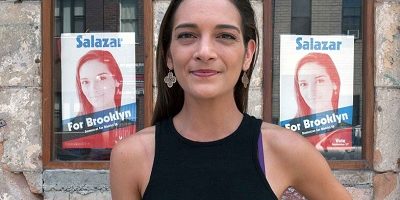 “Like most American Jews, I was raised with the delusion that Israel was a safe haven for me,” Julia Salazar wrote on Mondoweiss, an anti-Semitic hate site, while denouncing the Jewish State.

Salazar’s rant had appeared on a racist site whose creator had complained that his publication had been banned from DailyKos because of “my repeated insistence on talking about the large Jewish presence in the American establishment and the importance of Jewish money in the political process” and one of whose editors had declared, “I do not consider myself an anti-Semite, but I can understand why some are.”

In reality, Salazar had been baptized as a Catholic, her uncle was a Jesuit priest, and her brother made it clear that no one in the family was Jewish. The Jewish part of her past was as fake as the rest.

And it was this biography that the Democratic Socialists of America candidate was running on. The DSA had been hoping to turn Salazar into the next Alexandria Ocasio-Cortez, with the support of radical lefties like Cortez, Cynthia Nixon and Zephyr Teachout by playing up her imaginary biography.

But Salazar, a socialist candidate running for the State Senate in New York, had lied about that, and nearly everything else. Caught on video, claiming, “I immigrated to this country when I was little,” she had actually been born in Miami to an Italian-American mother and a Columbian immigrant father. Despite growing up in a mansion, she claimed to have a working class background. Her mother and her brother between them tore up most of her fake biography of a hardscrabble, immigrant life. Continue Reading….