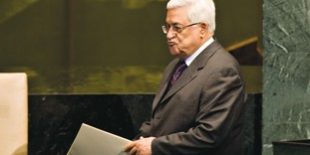 Palestinian Authority officials have warned that their people will respond to US President Donald Trump’s latest foreign policy moves in, apparently, the only way they know how–with an explosion of violence.

Earlier this month, Trump made good on his promise to cut all American funding to UNRWA, the United Nations body set up to perpetuate the Palestinian refugee issue, one of the major roadblocks to peace. He then slashed aid to Palestinian hospitals in East Jerusalem, purportedly over the Palestinian Authority’s refusal to conduct peace talks with Israel. This week, Trump put the icing on this particular cake by ordering the closure of the Palestine Liberation Organization (PLO) offices in Washington, DC. The mission served as the de facto Palestinian “embassy” to the US.

In remarks to Israel’s Channel 10 News, Palestinian officials lashed out at Trump, and threatened that his policies would mean more bloodshed for Israel.

“Trump has become an enemy of the Palestinian people and an enemy of peace,” said the Palestinians. “The American president is encouraging terror and extremism with his policies that could lead to violence in the region, which will explode in the faces of Israel and the US.”