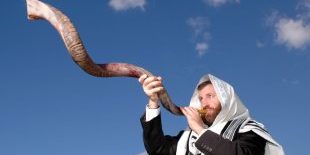 The traditional Jewish New Year is upon us. It’s called Rosh Hashanah in Hebrew and Rosh Hashoneh in Yiddish. The sons and daughters of Jacob nibble apples and honey as they hope for a sweet year. Synagogues register their highest attendance as the High Holy Days or ‘Days of Awe’ approach. The Day of Atonement (Yom Kippur or Yom Hikippurim) draws close and with it a heightened awareness of sin in the Jewish community.

Rosh Hashanah’s deeply moving traditions, liturgy and celebrations are a rich part of many Jewish people’s lives. Even some Gentile believers in Yeshua love the seasonal celebrations. But, like many pious celebrations in other religions, the Bible often plays second fiddle to men’s traditions.

The Hebrew Bible tells us that the Jewish New Year is not in Tishrei (which it calls the seventh month) but 14 days before Passover, in the first month of Spring (which is called Aviv in the Bible (Exodus 12:1-3; 13:4).

What is today called Rosh Hashanah is actually what the Bible calls ‘the Feast of Trumpets’ (or the ‘Feast of Blowing’ of trumpets). It is the fifth Feast in the biblical calendar (Leviticus23:23-25). It occurs in the biblical month called Eitanim (which means ‘the strong ones’ in Hebrew – see 1 Kings 8:1-2).

How did this all get switched, and who made off with the real biblical Jewish New Year?
What about the Feast of Trumpets? Does the Bible tell us how to celebrate it?
How can we interact in a user-friendly way with Jewish tradition?

“By the rivers of Babylon”

The twelve Jewish tribes went into Exile between 722 B.C. (Assyria) and 587/6 B.C. (Babylon). They took the 12 original names of the Hebrew months with them. These included:

When Israel returned from Babylonian Exile, according to Rabbi Hanina bat Hama (d. 250 A.D.) “the month names came up with them from Babylon” (Jerusalem Talmud, Rosh HaShanah 1:2, 56d). Babylonian names were gradually switched for the original Hebrew names after the days of Ezra and Nehemiah. Today eight of the twelve original Hebrew names of the months have disappeared.

The Babylonian royal calendar began its year in Tishrei (biblical Eitanim) and so the Jewish people gradually fitted in to this accepted international calendar.

Making room for an elephant

A famous Persian proverb says, “If you invite and elephant-trainer into your living room, make sure that you have room for an elephant!” The primacy given to Babylonian cultural influences gradually led to a weakening among the Jewish people in terms of staying faithful to biblical patterns and expressions. By 200 A.D. the biblical focus on the Feast of Trumpets had given way to a renamed and refashioned holiday now called ‘the New Year.’

The influence of the Exile and our sojourn in Babylon ended up shaping medieval and modern Jewish history. But when YHVH brings full restoration to His Jewish people, He will make some changes in our calendars and in our feast days, as Zechariah prophesied in Zechariah 7:1-6; 8:18-19.

Part of that restoration will involve a return to YHVH’s original calendar in Leviticus 23:2: “Speak to the sons of Israel and say to them, ‘YHVH’s appointed times which you shall proclaim as holy convocations – My appointed times are these…” As Paul says, “For the gifts and the calling of God are irrevocable” (Romans 11:29).

“I love New Year in the Springtime…”

The Hebrew calendar actually makes a connection between Passover preparations and the celebration of the New Year:

Now YHVH said to Moses and Aaron in the land of Egypt, “This month shall be the beginning of months for you; it is to be the first month of the year to you. Speak to all the congregation of Israel, saying, ‘On the tenth of this month they are each one to take a lamb for themselves, according to their fathers’ households, a lamb for each household’” (Exodus 12:1-3)

Two passages help us to understand the biblical focus of the Feast of Trumpets – Leviticus 23:23-25 and Nehemiah 8:8-12.

Leviticus 23 speaks of a wonderful Sabbath rest, a shabbaton, where no professional work is done. The day is a holy convocation (miqra qodesh) –
in modern English a specially called for meeting with a holy and set apart purpose. The ceremonial activity connected to blowing of trumpets or shofars here is zikaron teru’ah, a memorializing through a noise called teru’ah. Teru’ah can refer to a shofar blast (Leviticus 25:9; Hosea 5:8; Psalm 81:3/4), a great shout of joyous praise (2 Samuel 6:15; Ezra 3:11; Job 8:21; Psalm 27:6), or a resounding cymbal clash (Psalm 150:5).

The word speaks of explosive and joyous power, and usually refers to an extremely positive sonic event.

Nehemiah grants us deeper insight into God’s intentions – how to celebrate the Feast of Trumpets.

Then Nehemiah, who was the governor, and Ezra the priest and scribe, and the Levites who taught the people said to all the people, “This day is holy to YHVH your God; do not mourn or weep.” For all the people were weeping when they heard the words of the Torah. Then he said to them, “Go, eat of the fat, drink of the sweet, and send portions to him who has nothing prepared; for this day is holy to our YHVH. Do not be grieved, for the joy of YHVH is your strength.” So the Levites calmed all the people, saying, “Be still, for the day is holy; do not be grieved.” All the people went away to eat, to drink, to send portions and to celebrate a great festival, because they understood the words which had been made known to them (Nehemiah 8:8-12).

The God of Jacob lays it all out for us here. This is not a day for tears or fears. It is not a day to be afraid, to grieve or to mourn. It is a day to eat rich food, to drink sweet-tasting beverages, and to have a huge and joyous celebration. In short, YHVH is calling on His people to have a holy party!

In Nehemiah this party follows immediately on the heels of a national revival. The people had just heard the words of Deuteronomy 27-28. They understood that there was a good reason for the punishment of Exile, and they immediately repented of their national rejection of His prophets.

Today that same national call stands before our Jewish people – to realize that our Exile to America, England, Argentina, Russia, South Africa etc. – is due to our leaders’ rejection of the message of the Prophets and of Messiah Yeshua (Matthew 23:34-39; Mark 12:1-12). We as a nation have followed our leaders in their bad decision.

The need of the hour for us is national repentance. The need of the hour is to wake up and realize that our existence in the Exile is like that of a bird in a gilded cage. The God of our Fathers is calling us home – home to Him and Home to our homeland!

When Israel’s spiritual leaders rejected Yeshua Son of David as Messiah, He nevertheless offered Himself up for His people as our atonement. But the majority of the Pharisees could not see this or accept His gift. In the words of the Prophet, they created for themselves an alternate Judaism, one which astoundingly forsook the Redeemer of Israel: “My people have committed two sins: They have forsaken me, the spring of living water, and have dug their own cisterns, broken cisterns that cannot hold water” (Jeremiah 2:13).

Whereas Yeshua came to offer atonement to His people, only a minority (albeit a significant and apostolic minority) – the Messianic Jews – accepted Him. The religious powers-that-were reformed Judaism, offering non-kosher non-biblical forms of atonement that simply won’t do the trick. As Bob Dylan says in “When You Gonna Wake Up?” – “You got unrighteous doctors dealing drugs that’ll never cure your ills.”

Yom Kippur was gradually transformed into a fast day where people try to earn their own atonement. Rosh Hashanah became a day of pre-atoning preparation for the Great Fast.

God’s joyous invitation is still extended to Israel to celebrate with a thankful heart. But His offer has for the most part fallen by the wayside. Even today, many Messianic Jews are influenced more by rabbinic thought and tradition than by God’s gracious bidding to throw a holy party of thanksgiving.

The choice is ours.

How should we then pray?

Pray for a revelation for those who love the Scriptures to tap into God’s heart about these issues
Pray for revelation specifically for Bible teachers, pastors and teachers of the Word about these issues
Pray for the Jewish people who are turning their thoughts to deep issues of sin and atonement at this time – that YHVH would pour out a spirit of grace and supplications on us through a revelation of Messiah Yeshua our atonement
Pray for the raising up of Ezekiel’s army speedily and in our day
Your prayers and support hold up our arms and are the very practical enablement of God to us in the work He has called us to do.