Trump’s ‘Peace Process’ Starts by Ending the Fake One 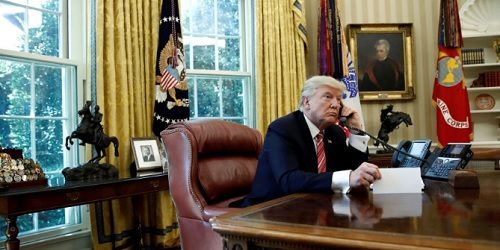 President Donald Trump’s decision last week to defund the UN Refugee Works Agency for Palestine (UNRWA) may not seems as significant as recognizing that Jerusalem is Israel’s capital and transferring the U.S. embassy from Tel Aviv to Jerusalem. But it is.

Both actions involve rejecting myths embedded in the failed peace process between Israel and the Palestine Liberation Organization (PLO). Both actions ground U.S. Middle East policy in reality. And consequently, both actions clear a path for a more stable future for all actors in the Middle East and for the U.S. in its relations with the states and peoples of the region.

On September 13, we will mark the 25th anniversary of the peace process between Israel and the PLO. The process, which was supposed to take five years to complete, was based on the idea that peace would be built on incremental moves that would gradually enmesh the two sides in a virtuous cycle of peace. The peace process is popularly dubbed “the Oslo process” because it was initiated through a series of secret negotiations between Israeli and PLO officials in Oslo, Norway.

In the first stages, Israel was supposed to transfer land to the PLO in Gaza, as well as Judea and Samaria (the West Bank), for the Palestinians to manage as an autonomous proto-state. To that end, Israel was expected to legitimize the PLO, an international terror group, funding its operations and lobbying foreign governments to underwrite the PLO-run autonomy, known as the Palestinian Authority (PA). Continue Reading…