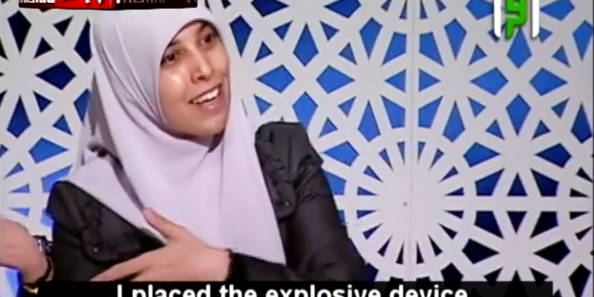 Ahed Tamimi, a 17-year-old Palestinian girl, was released from an Israeli prison on July 29, after sitting in jail and prison for almost 8 months. In March, she had been sentenced to an 8-month sentence after pleading guilty to charges of assault and incitement. Ahed was welcomed in the West Bank like a “hero”. “A crowd of supporters jostled for selfies with the teen,” the Washington Post reported.

Ahed became the center of international attention on December 15 when she assaulted an Israeli soldier. The soldier did not respond. Her mother posted the video on Facebook. In the video, Ahed is seen slapping and punching the soldier.

Immediately after her attack on the soldier on December 15, Ahed’s mother, who was filming Ahed, reportedly asked her daughter what kind of message she wanted to convey to viewers. Ahed replied, in part:

“Our strength is in our stones…. Whether it is stabbings or suicide bombings or throwing stones, everyone must do his part and we must unite in order for our message to be heard that we want to liberate Palestine.”

Later, Ahed and her mother were both arrested for the attack. Despite her public praising of violence, Ahed is now being lauded by many media outlets as a new “Palestinian protest icon.”

Among her biggest supporters was Turkey’s president Recep Tayyip Erdoğan, who congratulated her by telephone hours after her release from prison. Erdoğan “lauded her bravery and determination to fight”, and “assured the family that Turkey’s support for Palestinian’s just fight would continue,” reported the Turkish pro-government newspaper Sabah. Continue Reading….