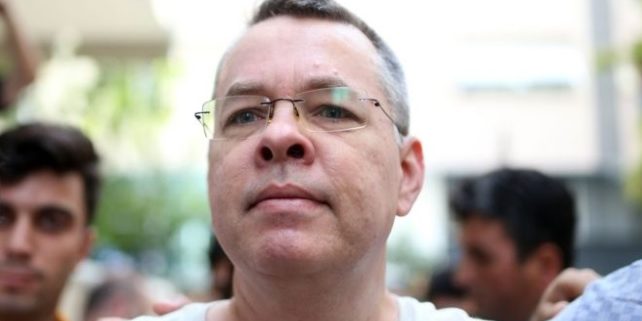 U.S. President Donald Trump on Thursday said the United States would impose significant sanctions on Turkey over its detention of American Christian pastor Andrew Brunson and called on Ankara to immediately release him.

“The United States will impose large sanctions on Turkey for their long time detainment of Pastor Andrew Brunson, a great Christian, family man and wonderful human being. He is suffering greatly. This innocent man of faith should be released immediately!” Trump tweeted.

U.S. Vice President Mike Pence on Thursday blasted Turkey over its detention of Brunson and threatened Ankara with U.S. sanctions unless the man was freed.

“To President Erdogan and the Turkish government, I have a message on behalf of the president of the United States of America: release Pastor Andrew Brunson now or be prepared to face the consequences.

“If Turkey does not take immediate action to free this innocent man of faith and send him home to America, the United States will impose significant sanctions on Turkey until Pastor Andrew Brunson is free,” Pence said on behalf of Trump at an event hosted by the U.S. State Department. Continue Reading….

US criticizes Turkey over ‘unwarranted’ invasion into Syria
October 24, 2019