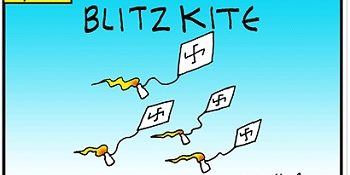 The demented nature of chunks of Palestinian society is hard to grasp.

For months now, Gazans have been sending flaming kites and balloons over the border fence and into Israeli fields and residential areas.

This morning one landed in an Israeli preschool.

Already, the Hamas project has destroyed thousands of acres of Israeli crops. And get this: Israel sends produce into poverty-wracked Gaza!

It’s really all quite unbelievable. Even though it’s real.

According to a report from The Times of Israel:

“The sources said that the Hamas leadership had decided to take action against the flaming kites ‘to prevent dragging Gaza into a war.’ They also said multiple parties, including Egypt, had told Hamas that the kites must be stopped ‘to prevent giving Israel an excuse to launch a major military offensive.’

“Over the past couple of years, Hamas leaders have said that they do not want a war with Israel, but also declared that their group’s military wing is prepared to fight.
Continue Reading….