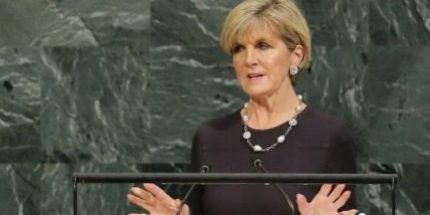 Australia said Monday that it has ended direct aid to the Palestinian Authority because Australian donations could increase the self-governing body’s capacity to pay Palestinians convicted of “politically motivated violence.”

Foreign Minister Julie Bishop said Australia had cut funding to the World Bank’s Multi-Donor Trust Fund for the Palestinian Recovery and Development Program after writing to the Palestinian Authority in late May seeking assurances that Australian funding was not going to Palestinian criminals.

“I am confident that previous Australian funding to the PA through the World Bank has been used as intended. However, I am concerned that in providing funds for this aspect of the PA’s operations there is an opportunity for it to use its own budget to activities that Australia would never support,” Bishop said in a statement.

“Any assistance provided by the Palestine Liberation Organization to those convicted of politically motivated violence is an affront to Australian values and undermines the prospect of meaningful peace between Israel and the Palestinians,” she added.

The country’s annual donation of 10 million Australian dollars ($7.4 million) to the trust fund will now be rerouted to the United Nations’ Humanitarian Fund for the Palestinian Territories which provides vulnerable Palestinians with health care, food, water, improved sanitation and shelter.

Australia allocated AU$43 million ($32 million) for humanitarian assistance in the region for the current fiscal year, which began on July 1.

In March, Israeli Prime Minister Benjamin Netanyahu praised the U.S. government for passing a law that suspended some financial aid to the Palestinians over the stipends paid to families of Palestinians terrorists killed or jailed in fighting with Israel.

The Taylor Force Act, named after an American killed in Israel by a Palestinian in 2016, was folded into a $1.3 trillion spending bill signed by President Donald Trump.

Netanyahu called the law a “powerful signal by the U.S. that changes the rules” by cutting “hundreds of millions of dollars for the Palestinian Authority that they invest in encouraging terrorism.”

“Minister Bishop’s strong and decisive decision today to ensure that the Palestinian Authority can no longer use our aid to free up money in its budget for state-promoted terrorism is very positive,” Abetz said.

“It is vital that we ensure that our foreign aid is not being spent on, or making money available for, the promotion of terrorism and so funneling our aid to the Palestinian territories through the United Nations will provide greater assurance that the Palestinian Authority’s clever accounting cannot occur,” he added.