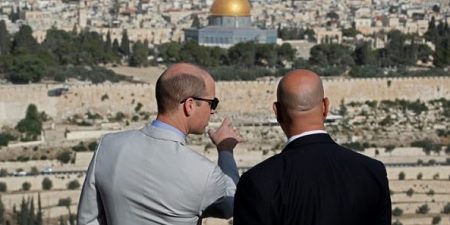 Prince William reportedly refused a request to meet with Jerusalem Mayor Nir Barkat in the capital out of concern that it would come across as a political statement. Barkat in turn refused to meet with the British royal outside the capital.

According to Israel’s Channel 2, Barkat asked to meet with the British royal in the capital but was told that meeting in that location would imply British recognition of Israeli sovereignty over Jerusalem. Instead the prince was told that he could meet with Barkat at a reception at the British ambassador’s residence in Ramat Gan.

Barkat refused, saying he would rather not meet at all “out of respect for Jerusalem.”

Barkat refused to meet with the prince in Ramat Gan, and he agreed to do so only in Jerusalem. This is the first official visit by a member of the British royal family to Israel, which is important and appropriate, but the State of Israel has one capital, which is a united Jerusalem. Barkat refused for the honor of Jerusalem and not for his own honor,” sources close to the mayor said.

The prince’s trip was the first official visit by a member of the royal family since the establishment of the State of Israel in 1948.

The visit sparked a minor controversy even before it took place when Kensington Palace used the term “Occupied Palestinian Territories” to describe his upcoming visit to Jerusalem’s Old City.