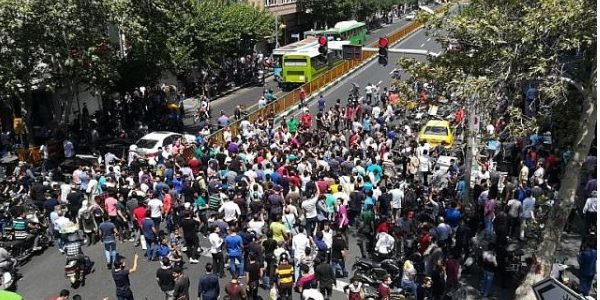 Iran’s regime is struggling to restore calm in the capital, after three days of protests rocked central and symbolic areas, including the Bazaar and near the parliament. The protests have focused on the economic crisis in Iran and the feeling that the leadership is disconnected from the concerns of average Iranians.

The protests come after six months of unrest in Iran that began in December 2017 and have included sporadic protests about a variety of issues, from the economy to women’s rights and foreign policy.

As the initial protesters were gathering on Sunday, Iran’s leadership put on a positive face. Deputy Foreign Minister Abbas Araghchi predicted that European states would put forward economic support against US sanctions within ten days and help preserve the Iran Deal (officially called the Joint Comprehensive Plan Of Action).

Foreign Minister Javad Zarif boasted, “We are all in one ship in Iran: principalists, reformists, non-partisans and opponents of the Islamic Republic.”

But by mid-day Abas Aslani, a journalist and visiting scholar at the Center for Middle East Strategic Studies, said that Iranians were criticizing President Hassan Rouhani for traveling to the Tochal resort “while Iranian currency is depreciating day by day.” Even as the government was banning 1,339 imports, he was accused of wearing US brands. Continue reading…