The Peril of Politicized Antisemitism 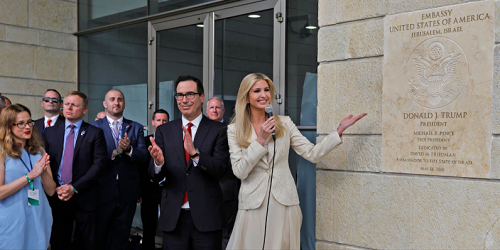 There are a number of distressing aspects to this state of affairs. First and foremost, it is pure libel to call US President Donald Trump a Nazi

Beyond his Jewish immediate family, Trump has shown extraordinary friendship to the Jewish state. It isn’t simply that Trump kept the promise none if his predecessors kept and moved the US Embassy to Jerusalem, although that would have sufficed to prove his friendship.

Trump shows his friendship and respect for Israel every single day.

This week, Trump approved UN Ambassador Nikki Haley and Secretary of State Mike Pompeo’s determination that the US should withdraw from the institutionally antisemitic UN Human Rights Council. The Obama administration joined the council claiming it would use its membership to influence the council for the better and proceeded to legitimize council’s anti-Jewish witch hunt for eight years.

The people of Israel recognize Trump’s friendship. Nearly 80% of Israelis view him as a friend. So what explains the 70,900,000 results to the “Trump Nazi” Google search?

The policy is cruel. Indeed, recognizing its cruelty, Trump signed an executive order banning the practice.

But the policy isn’t new. This was the Obama administration’s policy following a court order prohibiting children from joining their parents in detention.

Rather than soberly acknowledge that law enforcement, including immigration law is often a cruel business and recognize that to remain a state of laws sometimes authorities undertake difficult and harsh actions, the anti-Trump media ignored reality and went straight for the kill. David Remnick, Frank Bruni and countless others didn’t care that the Obama administration separated children from their parents, placed them in cages and wrapped them in aluminum foil.

As far as they are concerned, the continuation of the same cruel policy under Trump is proof that Trump is a Nazi.

Gen. Michael Hayden, the former director of the NSA and the CIA posted a photo of the entrance to Auschwitz on his Twitter feed with a caption “Other governments have separated mothers and children.”

As much as Hayden and his comrades hate Trump, by claiming that enforcing laws of Congress is Nazi behavior, they are demonizing the US and engaging in rank antisemitism. Mexican children separated from their parents because they broke properly constituted laws of a liberal republic are not the moral equivalent of the million Jewish children murdered by the Nazis for the “crime” of breathing while Jewish. Congress is not the Reichstag. And the Rio Grande is not Auschwitz.

Hayden and his comrades are not idiots. So why are they making these unhinged, libelous claims? The answer is that their actions are part of a wider move by Democrats to politicize antisemitism.

Much has been made of the fact that support for Israel is becoming a partisan issue. Whereas Republicans are almost unanimous in support for the US alliance with Israel, support among Democrats is flagging and becoming a minority view on the rapidly growing far Left.

What has gone largely unmentioned is that antisemitism is also becoming a partisan issue. As their party becomes more hostile to Israel, Democrats are increasingly highlighting the neo-Nazi elements at the fringe of the Republican Party as a means of implicating the entire Republican Party – led by Trump – as antisemitic and dangerous.

At the same time, even as leading members of the Democratic Party like Keith Ellison and luminaries like Linda Sarsour openly espouse anti-Jewish sentiments and propagate antisemitic conspiracy theories, Democrats ignore, whitewash, deny and minimize the significance of the swelling chorus of antisemitism within their ranks.

Compare the responses of Democrats and Republicans to the appearance of antisemites on their ballots.

In the current election cycle, three white supremacists have sought office as Republican candidates. Arthur Jones, a 70-year-old white supremacist Nazi, running for Congress in Illinois’s 3rd Congressional district ran a stealth campaign for the safe Democratic seat. He quietly collected the requisite signatures to file his papers with the state election commission, blindsiding the GOP, which had not planned to field a candidate to run against incumbent Dan Lipinski who has won the last seven elections by a 70-30 margin.

In response to Jones’s maneuver, the state and national GOP condemned and disavowed him in the harshest terms. The state party announced it would field an independent candidate to run in the general election against Jones and Lipinski.

Rather than acknowledge the poll’s statistical insignificance, the Forward, Newsweek and Yahoo news ran stories about Little and the poll claiming that it proved that empowered by Trump, Nazis are taking over the Republican Party. The fact that the California GOP forcibly removed Little from their state convention was barely reported in the national media.

Paul Nehlen, a Democratic candidate for Congress in House Speaker Paul Ryan’s district was supported by many conservatives until last December when it came out that he is a white supremacist. As soon as his positions – which he had deliberately hidden – were revealed, every major and minor conservative media outlet and politician condemned him.

But that hasn’t stopped CNN from waging a campaign against Virginia Republican Senate nominee Corey Stewart for having endorsed Nehlen a month before his positions were publicized. Stewart unconditionally condemned Nehlen once his anti-Jewish bigotry was exposed.

In the Democratic tent itself, things are a bit different.

Rising stars in the Democratic Party, including Rep. Ellison and Women’s March leaders Tamika Mallory and Linda Sarsour along with the Congressional Black Caucus embrace Louis Farrakhan, and defend his notorious, virulent hatred of Jews. They demonize Israel and its Jewish supporters.

Far from being attacked or otherwise denounced for their actions, these Democrats are advanced and promoted. Ellison is the vice-chairman of the Democratic National Committee. Mallory and Sarsour, Maxine Waters and other members of the CBC are feted by party leaders including Senators Bernie Sanders and Elizabeth Warren.
Democratic Jews have to date refused to mobilize to oppose them in any significant way. Indeed, in some cases they support antisemites.

Take the Jewish community of Charlottesville, Virginia’s reaction to the Congressional candidacy of Democrat Leslie Cockburn. Cockburn is the co-author, with her husband, Andrew Cockburn, of the 1991 book, Dangerous Liaison: The Inside Story of the US-Israeli Covert Relationship.

The New York Times review of the book said, “Their book, supposedly a history of the secret ties between Israel and the United States, is largely dedicated to Israel-bashing for its own sake. Its first message is that win or lose, smart or dumb, right or wrong, suave or boorish, Israelis are a menace. The second is that the Israeli-American connection is somewhere behind just about everything that ails us.”

Rather than excoriate Cockburn for her history of propagating antisemitic conspiracy theories, the Washington Jewish Week wrote an empathetic article about her quest to have an open exchange with the Jewish community in her district. One member of the Jewish community who was prominently cited as an authority on her outreach to the community, noted approvingly that in a meeting with Jewish constituents Cockburn “pointed out that her views on Israel align with J Street.”

New York Times reporter and author Jonathan Weisman epitomizes the Democrats’ simultaneous promotion of leftist antisemitism and castigation of the Republicans as the new Nazi party. During the 2015 battle over the Obama administration’s nuclear deal with Iran, Weisman, who is Jewish, co-authored an article singling out by name the Jewish members of Congress who opposed the deal. In other words, he engaged in antisemitism to demonize Jewish opponents of the Obama administration’s anti-Israel policy of empowering Iran.

In 2017 Weisman wrote a widely cited book, (((Semitism))): Being Jewish in America in the Age of Trump.

Weisman’s basic argument in his book is that Trump’s populism empowers far-Right antisemites and so threatens the Jewish community in the US.

It isn’t that antisemitism on the far Right is nothing to be concerned about it. To the contrary. There is great reason to be concerned, even alarmed by the Jew-hating rhetoric emanating from the far Right. To their credit, cognizant of the danger, Republican leaders, including Trump have consistently condemned and marginalized these voices and actors in their party.

There is also reason to be concerned with left-wing antisemitism, including when it takes the form of a New York Times journalist singling out for rebuke Jewish members of Congress who oppose an anti-Israel policy. Left-wing antisemitism should be should be fought without prejudice even when it is being propagated by minority groups. Farrakhan should not get a pass, nor should his African-American supporters.

Because the US has a two-party system, marginal forces always seek to use the machinery of the large parties to advance their positions and causes. As a consequence, it is not surprising that antisemites on the Right seek to penetrate the GOP. And it isn’t surprising that their leftist counterparts are seeking to take over the Democratic Party. But again, while the state and national Republican Party condemns and disowns antisemites, the Democrats woo them for their votes and political support and elect them to office. And as they do these things, they libel the Republican Party and Trump accusing them of Nazi sympathies and goals.

It is hard to see a happy end to the story. By attacking Trump, the most pro-Jewish president in living memory, as a Nazi, while ignoring the dangers of the growing power and numbers of antisemites in their own party, Jewish Democrats are doing themselves no favors. So long as Jewish Democrats go along with the rise of antisemitic forces in their party on the one hand, and assault the Republicans as Nazis on the other, the situation will only get more dangerous for them and for the Jewish community in the US as a whole.