Following in Jesus’ Footsteps to Serve in the IDF 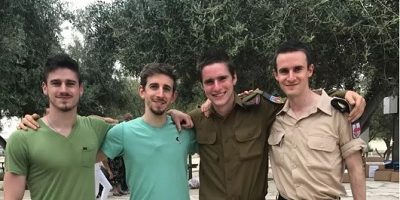 Simon Zauber believes serving in the IDF is his way of following in Jesus’ footsteps.

“We were raised in believing in Jesus and to follow his footsteps and what he did was serve so for me it’s very important to serve, in any way I can,” the 19-year-old Givati soldier originally from North Carolina told The Jerusalem Post on Tuesday.

Zauber is a Messianic Jew, Christians who believe that Jesus, or Yeshua, is the Messiah and is the only path to redemption. There are an estimated 20,000 Messianic Jewish believers in Israel, but due to their beliefs have been subjected to discrimination, such as being ineligible to make aliya because it is not accepted that a Jew can believe in Jesus, even though they consider themselves to be Jewish.

His upbringing as a Messianic Jew had a major impact on his decision to come to Israel and serve in the IDF, Zauber told the Post, explaining that while he did not initially plan to come to Israel he changed his mind in the middle of his final semester at university.