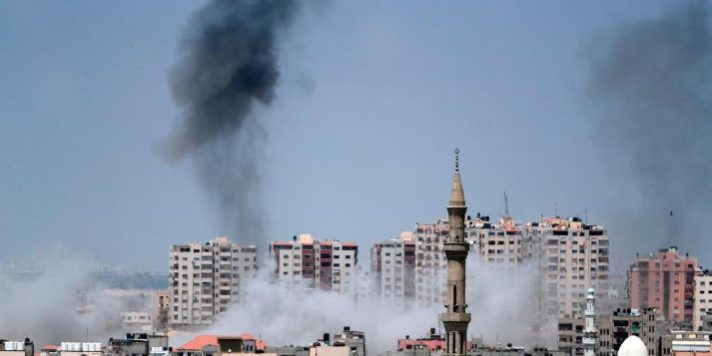 By Michael Bachner, Times of Israel—

Prime Minister Benjamin Netanyahu vowed Tuesday to respond “with great force” to a barrage of at least 28 mortar shells fired in the morning at communities in southern Israel, one of which landed just outside a kindergarten less than an hour before children were due to arrive.

“Israel views the attacks on it and on its communities by Hamas and Islamic Jihad from the Gaza Strip with great severity,” Netanyahu said during a conference in the northern Galilee region, ahead of urgent security consultations set to take place later in the day.

“The IDF will retaliate with great force to these attacks,” the prime minister added. “Israel will make anyone trying to harm it pay a heavy price, and we view Hamas as responsible for preventing such attacks against us.”

As a matter of policy, the Israeli army considers Hamas, which rules Gaza, to be responsible for any attack emanating from the beleaguered coastal enclave.

The attacks, which triggered three rounds of sirens in the Sha’ar Hanegev and Eshkol regions, were apparently mounted by the Iranian-backed Palestinian Islamic Jihad terror group in revenge for the IDF killing three of its members in a cross-border exchange earlier in the week.

It appeared to be the largest attack from the Gaza Strip, in terms of the number of projectiles fired, since the 2014 war, known in Israel as Operation Protective Edge.

One person was lightly injured.

Most of the shells were intercepted by the Iron Dome missile defense system.

“No country would or should accept such threats to its civilian population. Neither do we,” a Foreign Ministry spokesman said.

“The shooting of rockets this morning from Gaza, one of them landing in the yard of an empty kindergarten (!), demonstrates the grave danger Hamas represents to Israeli civilians.”

Lawmakers from across the political spectrum called for harsh action against the group, which is also supported by Iran and committed to erasing the Jewish state.

Knesset Speaker Yuli Edelstein (Likud) said, “The firing of mortars at a kindergarten is the most serious red line.”

The opposition Zionist Union’s leader, Avi Gabbay, said Israel owed it to the southern Israeli communities to “respond to firing and damage on the Gaza border and to do everything necessary to prevent the next round.”

Former Labor party leader Amir Peretz, a resident of the Gaza border area, said the attack was an escalation of violence. “The IDF must react very severely, more than before. It doesn’t matter if it’s Islamic Jihad or Hamas. Hamas is the ruler of the Strip and it must pay the price.”

Moti Yogev of the right-wing Jewish Home party called for the assassination of terror groups’ leaders and their replacement with a regime that will cooperate in “helping the population of Gaza to live.”

President Reuven Rivlin, meanwhile, phoned the kindergarten next to which one of shells landed and told children that he and his wife, Nechama, were waiting to meet them at the President’s Residence.

In a statement, Islamic Jihad described its attack as “a blessed response of the resistance,” adding, “our people’s blood is not cheap.”

The military responded to the Tuesday morning attack by shelling a number of positions belonging to terrorist groups in the Gaza Strip, Palestinian media reported.

The army would not immediately confirm it had conducted retaliatory strikes.