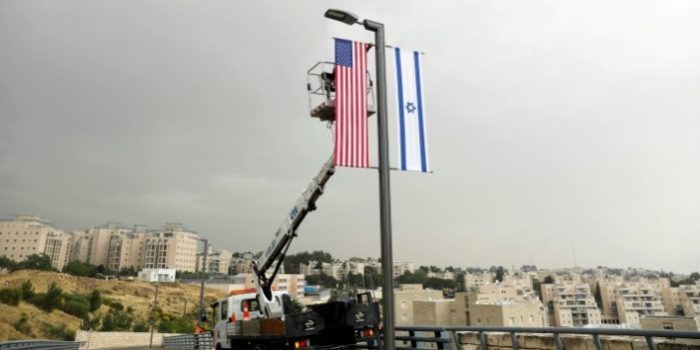 President Donald Trump’s decision to move the US embassy to Jerusalem and recognize the city as Israel’s capital represented an “important turning point” and “act of courage and integrity,” a leading scholar told The Algemeiner.

The new embassy was dedicated on Monday at a ceremony attended by numerous dignitaries, including the president’s daughter Ivanka Trump and her husband Jared Kushner, both senior White House advisers.

“What a glorious day,” Prime Minister Benjamin Netanyahu declared at the event. “Remember this moment, this is history. President Trump, by recognizing history, you have made history.”

Joel Fishman, a fellow at the Jerusalem Center for Public Affairs, agreed, told The Algemeiner later on Monday, “The decision to recognize Jerusalem as the capital of Israel and to open up the embassy in Jerusalem represents an important turning point. People have known the reality, but to recognize the reality is a very big step forward.”

The move was significant at several levels, according to Fishman. “First of all,” he said, “it was an act of great personal courage on the part of President Trump, because politically it’s not an easy decision and he might find he’ll have to pay a price for it. Any person who keeps his promises is worthy of respect on that basis. It’s an act of courage and integrity.”

In addition, Fishman noted, moving the embassy was “a service to the truth” that represented a major defeat for the Palestinians’ efforts to delegitimize Israel.

“If you look at the immediate political background over the past few years, the Palestinians and the Arab countries have been trying through the United Nations to negate and deny the link of the Jewish people, the historical link of the Jewish people to Jerusalem, and to make it appear as if we were simply intruders from outside without any standing and without any rights,” he stated.

“So we can say when untruth like that is spread it’s very dangerous because through repetition it’s the method of spreading the ‘big lie,’” he continued. “So by recognizing Jerusalem, President Trump put an end to the spread of this falsehood which would have become an accusation against Israel very similar to the accusation that Israel is an apartheid state or Israel is racist. It would be another propaganda trope. So President Trump brought an end to the spread of this historical narrative.”

Trump’s move also puts an end to a concept known as “parallelism” that developed during the Oslo peace process of the 1990s, Fishman added.

“The reality of Israel began to be considered as parallel to that of the Palestinians,” he stated. “This is called ‘parallelism.’ And through the idea of introducing parallelism and ‘evenhandedness,’ the existence of the Jewish state was somehow predicated on the condition of the Palestinians and how they felt about the world.”

“I personally had the opportunity to hear Yasser Arafat speak in a small closed gathering in March 1995,” he recounted. “And he said that the Jewish state would not have international recognition and legitimacy without the approval of the Palestinians, and it was in the power of the Palestinians to withhold this type of legitimacy and recognition. Through the act of recognition, Trump has brought an end to the era of parallelism. We now stand on the historical stage in our own right, whether or not the Palestinians like it.”

“It’s a big turning point,” Fishman emphasized. “It’s like winning a war. And I hope that we will consolidate our gains.”

“The Palestinians can no longer exact a price for something that never belonged to them,” he concluded.