13 Inconvenient Truths About What Has Been Happening in Gaza 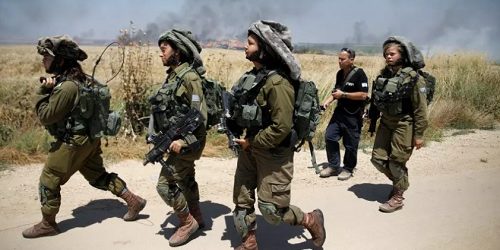 The cacophony that accompanies every upsurge in the Israeli-Palestinian conflict can make it seem impossible for outsiders to sort out the facts. Recent events in Gaza are no exception. The shrillest voices on each side are already offering their own mutually exclusive narratives that acknowledge some realities while scrupulously avoiding others.

To that end, here are 13 complicated, messy, true things about what has been happening in Gaza. They do not conform to one political narrative or another, and they do not attempt to conclusively apportion all blame. Try, as best you can, to hold them all in your mind at the same time.

1. The protests on Monday were not about President Donald Trump moving the U.S. Embassy to Jerusalem, and have in fact been occurring weekly on the Gaza border since March. They are part of what the demonstrators have dubbed “The Great March of Return”—return, that is, to what is now Israel. (The Monday demonstration was scheduled months ago to coincide with Nakba Day, an annual occasion of protest; it was later moved up 24 hours to grab some of the media attention devoted to the embassy.) The fact that these long-standing Palestinian protests were mischaracterized by many in the media as simply a response to Trump obscured two disquieting realities: First, that the world has largely dismissed the genuine plight of Palestinians in Gaza, only bothering to pay attention to it when it could be tenuously connected to Trump. Second, that many Palestinians do not simply desire their own state and an end to the occupation and settlements that began in 1967, but an end to the Jewish state that began in 1948.

2. The Israeli blockade of Gaza goes well beyond what is necessary for Israel’s security, and in many cases can be capricious and self-defeating. Import and export restrictions on food and produce have seesawed over the years, with what is permitted one year forbidden the next, making it difficult for Gazan farmers to plan for the future. Restrictions on movement between Gaza, the West Bank, and beyond can be similarly overbroad, preventing not simply potential terrorist operatives from traveling, but families and students. In one of the more infamous instances, the U.S. State Department was forced to withdraw all Fulbright awards to students in Gaza after Israel did not grant them permission to leave. Today, official policy bars Gazans from traveling abroad unless they commit to not returning for a full year. It is past time that these issues be addressed, as outlined in part in a new letter from several prominent senators, including Bernie Sanders and Elizabeth Warren.

3. Hamas, which controls the Gaza Strip, is an authoritarian, theocratic regime that has called for Jewish genocide in its charter, murdered scores of Israeli civilians, repressed Palestinian women, and harshly persecuted religious and sexual minorities. It is a designated terrorist group by the United States, Canada, and the European Union.

4. The overbearing Israeli blockade has helped impoverish Gaza. So has Hamas’s utter failure to govern and provide for the basic needs of the enclave’s people. Whether it has been spending its manpower and millions of dollars on subterranean attack tunnels into Israel—including under United Nations schools for Gaza’s children—or launching repeated messianic military operations against Israel, the terrorist group has consistently prioritized the deaths of Israelis over the lives of its Palestinian brethren.

5. Many of the thousands of protesters on the Gaza border, both on Monday and in weeks previous, were peaceful and unarmed, as anyone looking at the photos and videos of the gatherings can see.

6. Hamas manipulated many of these demonstrators into unwittingly rushing the Israeli border fence under false pretenses in order to produce injuries and fatalities. As the New York Times reported, “After midday prayers, clerics and leaders of militant factions in Gaza, led by Hamas, urged thousands of worshipers to join the protests. The fence had already been breached, they said falsely, claiming Palestinians were flooding into Israel.” Similarly, the Washington Post recounted how “organizers urged protesters over loudspeakers to burst through the fence, telling them Israeli soldiers were fleeing their positions, even as they were reinforcing them.” Hamas has also publicly acknowledged deliberately using peaceful civilians at the protests as cover and cannon fodder for their military operations. “When we talk about ‘peaceful resistance,’ we are deceiving the public,” Hamas co-founder Mahmoud al-Zahar told an interviewer. “This is peaceful resistance bolstered by a military force and by security agencies.”

7. A significant number of the protesters were armed, which is how they did things like this:

Widely circulated Arabic instructions on Facebook directed protesters to “bring a knife, dagger, or gun if available” and to breach the Israeli border and kidnap civilians. Hamas further incentivized violence by providing payments to those injured and the families of those killed. Both Hamas and the Islamic Jihad terror group have since claimed many of those killed as their own operatives and posted photos of them in uniform. On Wednesday, Hamas Political Bureau member Salah Al-Bardawil announced that 50 of the 62 fatalities were Hamas members.

Contrary to certain Israeli talking points, however, these facts do not automatically justify any particular Israeli response or every Palestinian casualty or injury. They simply establish the reality of the threat.

8. It is facile to argue that Gazans should be protesting Hamas and its misrule instead of Israel. One, it is not a binary choice, as both actors have contributed to Gaza’s misery. Two, as the BBC’s Julia MacFarlane recalled from her time covering Gaza, any public dissent against Hamas is perilous: “A boy I met in Gaza during the 2014 war was dragged from his bed at midnight, had his kneecaps shot off in a square and was told next time it would be axes—for an anti-Hamas Facebook post.” The group has publicly executed those it deems “collaborators” and broken up rare protests with gunfire. Likewise, Gazans cannot “vote Hamas out” because Hamas has not permitted elections since it won them and took power in 2006. The group fares poorly in the polls today, but Gazans have no recourse for expressing their dissatisfaction. Protesting Israel, however, is an outlet for frustration encouraged by Hamas.

9. In that regard, Hamas has worked to increase chaos and casualties stemming from the protests by allowing rioters to repeatedly set fire to the Kerem Shalom crossing, Gaza’s main avenue for international and humanitarian aid, and by turning back trucks of needed food and supplies from Israel.

10. A lot of what you’re seeing on social media about what is transpiring in Gaza isn’t actually true. For instance, a video of a Palestinian “martyr” allegedly moving under his shroud that is circulating in pro-Israel circles is actually a 4-year old clip from Egypt. Likewise, despite the claims of viral tweets and the Hamas-run Gaza Health Ministry that were initially parroted by some in the media, Israel did not actually kill an 8-month old baby with tear gas. The Gazan doctor who treated her told the Associated Press that she died from a preexisting heart condition, a fact belatedly picked up by the New York Times and Los Angeles Times. In the era of fake news, readers should be especially vigilant about resharing unconfirmed content simply because it confirms their biases.

11. There are constructive solutions to Gaza’s problems that would alleviate the plight of its Palestinian population while assuaging the security concerns of Israelis. However, these useful proposals do not go viral like angry tweets ranting about how Palestinians are all de facto terrorists or Israelis are the new Nazis, which is one reason why you probably have never heard of them.

12. A truly independent, respected inquiry into Israel’s tactics and rules of engagement in Gaza is necessary to ensure any abuses are punished and create internationally recognized guidelines for how Israel and other state actors should deal with these situations on their borders. The United Nations, which annually condemns Israel in its General Assembly and Human Rights Council more than all other countries combined, and whose notorious bias against Israel was famously condemned by Obama ambassador to the U.N., Samantha Power, clearly lacks the credibility to administer such an inquiry. Between America, Canada, and Europe, however, it should be possible to create one.

13. But because the entire debate around Israel’s conduct has been framed by absolutists who insist either that Israel is utterly blameless or that Israel is wantonly massacring random Palestinians for sport, a reasonable inquiry into what it did correctly and what it did not is unlikely to happen.