High-Profile Ceremony for the Forthcoming Museum in Lithuania 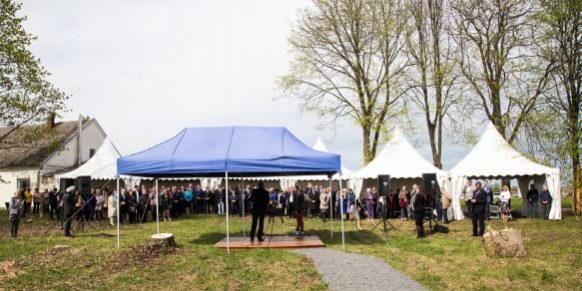 On May 4, 2018 the ground-breaking ceremony for The Lost Shtetl Museum and Memorial Complex took place in the middle of Lithuania, in Seduva. The project is designed by professor Rainer Mahlamäki and Lahdelma & Mahlamäki Architects, Finland. Professor Mahlamäki attended the ceremony, as well as Dr Inna Rogatchi, the author of the forthcoming film and book on Rainer Mahlamäki’s projects of memorial architecture.

The ceremony was attended by the entire leadership of Lithuania and a large group of the diplomatic corps. The President of Lithuania Dalia Grybauskaite had sent a meaningful Greetings Letter to the ceremony; which was read by the president’s special adviser.

The President of Lithuania said in her address: “Today the symbolic capsule marks not only the start of the construction of a unique museum. It also heralds the reconstruction of an important part of Lithuanian history closely interlinked with the history of Lithuania’s large Jewish community and its tragic fate. The Lost Shtetl Museum will bring back from oblivion the names and faces of many families, friends and neighbours, as well as their customs and traditions.”

The Speaker of the Seimas Viktoras Pranckietis, the Prime Minister Saulius Skvernelis, and the Minister for Foreign Affairs of Lithuania Linus Linkevicius all addressed the public with personal, honest and engaging speeches. The Speaker of the Seimas Viktoras Prancketis told that he and his family are from Seduva, and conveyed a moving story of the personal letter from the famous American artist Samuel Bak who is a child survivor of the Vilna ghetto, to Mr Pranckietis’ father. It that letter of pain and fervour, the artist wrote of his compassion for his people annihilated in the Holocaust, to be remembered.

The Prime-Minister of Lithuania Saulius Skvernelis began his address with an official apology for the role of the Lithuanian perpetrators of the Holocaust, and his both official and personal conviction that today the subject has to be dealt with clarity and honesty.

The Foreign Minister of Lithuania Linus Linkievicius emphasised that any commemoration is able to erase the calamity of the trauma of the Holocaust in Lithuania, to recuperate that terrible loss caused intentionally and criminally.

The Chairperson of the Lithuanian Jewish Community Faina Kukljanski emphasised in her emotional speech: “Slowly we are able to learn anew the history of the murdered Jewish shtetl, Šeduva, to which the restored old Jewish cemetery testifies, and we can bow our heads before the statues which symbolize our respect for those murdered in the Holocaust. The centurieslong,fascinating and rich history of the Jews of Lithuania was cut short. Today marks an important moment for Jews and all Lithuanians who care about that history cut short by the Holocaust, the story which the new museum to commemorate the Jews of Šeduva will soon tell us. The museum will symbolically revive the colourful and diverse life of the Jewish community”.

Internationally renowned cultural personality, long-term director of the Lithuanian State Gaon Jewish Museum Markas Zingeris in his energetic, powerful and deep speech brought the audience back in time, back to the young Jewish boys and girls, poets and musicians, whose life had been cut off so cruelly. He also spoke on the eternal trauma of the Yiddish world due to the catastrophic losses caused by Holocaust – and utter necessity for the museums like The Lost Shtetl to be constructed and starting to function, not for Lithuania only, but for Europe and the world.

The diplomatic corps had considerable representation at the ceremony. Their solidarity, respect and support came to show the Ambassadors of Finland, United States, United Kingdom, France, Germany, Sweden, Ireland, Russia, Armenia, and of many other countries, completing a team of 15 Ambassadors from all around the world. On behalf of their countries, the Ambassadors of the USA and Finland had addressed the public. HE Anne Hall, the US Ambassador spoke on the necessity of restoration of memory in both the national and international context. HE Christer Michelsson delivered his elegant speech as a proud compatriot of the author of the museum’s design, prominent Finnish architect professor Rainer Mahlamäki.

The special address of famous Lithuanian film director Saulius Berzinis was an emotional peak of the ceremony. The famous movie director and the founder and director of the Independent Holocaust Research Archive in Lithuania has donated to the future museum one of his most treasured belongings, his inheritance as he put it: the original LP vinyl record of the wellknown cantor Mordechai Herschman. That record produced in late 1920s-early 1930s in France had been a favourite treasure of a talented Jewish boy who dreamed to become a cantor and who had listened to the record numerous times during his short life. The boy and his entire family perished in the Vilna ghetto.

In his strong speech, Sergey Kanovich, the main driving force of The Lost Shtetl project, said: “When we talk about the past of Lithuanian Jewry, we often say that “time was merciless”. Merciless to human beings, merciless to things they had created, merciless to heritage and memory. But time is not anonymous. We cannot put all the blame and guilt on it. We create time. It depends on us what time will be like. It depends on the here and now. Memory is the responsibility of all of us”.

The ceremony ended with laying a memorial capsule into the foundations of the coming Museum by the students of the Seduva gymnasium and the Jewish gymnasium from Vilnius.
Inside the capsule had been put the text from the book of prominent Jewish writer Grigory Kanovich, the father of Sergey Kanovich: “It was bitter to realize the truth that from now on
it was the fate of that dead tribe to be born and live only in the true and painful words of impartial memory in which it was impossible to drown the echoes of love and gratitude
towards our forebears. Whoever allows the dead to fall into oblivion will himself be justly consigned to oblivion by future generations “.

After the end of the official part of the ceremony, the leadership of Lithuania, the Ambassadors and many participants came to visit the Jewish cemetery, situated nearby and recently restored by the Seduva Jewish Memorial Fund, the same organisation that runs the project for The Lost Shtetl Museum and Memorial Complex. The Museum is planned to be open in the summer 2020.