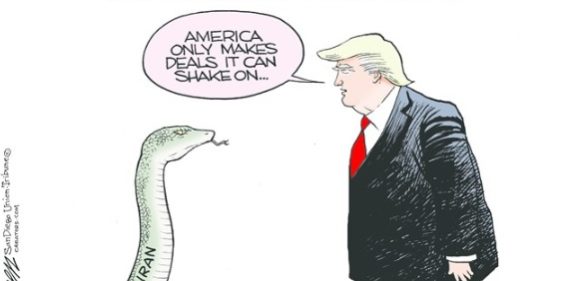 Prime Minister Benjamin Netanyahu, this evening (Tuesday, 8 May 2018), issued the following statement:
“Israel fully supports President Trump’s bold decision today to reject the disastrous nuclear deal with the terrorist regime in Tehran. Israel has opposed the nuclear deal from the start because we said that rather than blocking Iran’s path to a bomb, the deal actually paved Iran’s path to an entire arsenal of nuclear bombs, and this within a few years’ time. The removal of sanctions under the deal has already produced disastrous results. The deal didn’t push war further away, it actually brought it closer. The deal didn’t reduce Iran’s aggression, it dramatically increased it, and we see this across the entire Middle East. Since the deal, we’ve seen Iran’s aggression grow every day- in Iraq, in Lebanon, in Yemen, in Gaza, and most of all, in Syria, where Iran is trying to establish military bases from which to attack Israel.
Despite the deal, the terrorist regime in Tehran is developing a ballistic missiles capability, ballistic missiles to carry nuclear warheads far and wide, to many parts of the world.
And as we exposed last week, since the deal, Iran intensified its efforts to hide its secret nuclear weapons program.
So if you leave all of this unchanged, all this combined is a recipe for disaster, a disaster for our region, a disaster for the peace of the world.
This is why Israel thinks that President Trump did an historic move and this is why Israel thanks President Trump for his courageous leadership, his commitment to confront the terrorist regime in Tehran and his commitment to ensure that Iran never gets nuclear weapons, not today, not in a decade, not ever.”