The Ayatollahs’ clear and present threat to the USA 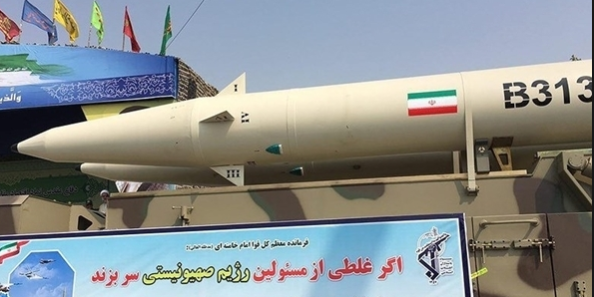 1. The tyrannical Ayatollah regime – oppressing Iran’s majority – is driven by a megalomaniacal ideology, clearly reflected by its K-12 curriculum, brainwashing Iran’s youth for full commitment to the “divine battle” against the US, “the Great Satan,” the “infidel” Sunni Muslims, Christians, Jews, Baha’is, Kurds, Azerbaijanis, etc.

2. The Ayatollahs’ super-ideology – the leading sponsors of Islamic terrorism – is the commitment to global supremacy of Shite Islam through Jihad (“Holy War”), which is the permanent state of relations between “the believers” and the “apostates” and the “illegitimate infidels.” Hence, agreements with infidels are tenuous and non-binding. The Ayatollahs’ super-ideology is bolstered by a sacred allegiance to the fulfillment of the 2,600 year old Persian-Iranian regional and global imperialistic aspiration.

3. The Ayatollahs’ super-geo-strategic goal, which supersedes economic and social matters, is the domination of the Persian Gulf, the Middle East and beyond, irrespective of the Palestinian issue.

5. The Ayatollahs pursue super-capabilities (in collaboration with North Korea, Pakistan, Venezuela, etc.) – ballistic and nuclear – in order to deter and defeat the super-enemy/hurdle and advance the super-goal, in adherence to their super-ideology. The Ayatollahs’ pursuit of super-capabilities has accelerated the proliferation of conventional and non-conventional military systems in the Middle East and beyond, adding fuel to global instability and violence.

6. The Ayatollahs’ super-tactic, while communicating with the West, has been the Taqiyya: Islam-sanctioned dissimulation, deception and concealment of inconvenient data, aimed at protecting “believers” from “hostile” elements via illusive agreements. President Rouhani demonstrated his Taqiyya proficiency during his 2002 negotiation with the International Atomic Energy Agency, stating: “We are not pursuing nuclear weapons, chemical weapons, biological weapons….”

7. The Ayatollahs’ advanced ballistic capabilities and terrorist network are sufficient to deal a major blow to the US national and homeland security, as well as economy – possibly forcing the US and NATO out of the Persian Gulf – by toppling the pro-US Arab “apostate” regimes in Saudi Arabia, Bahrain (Iran’s “province #14”), the UAE, Kuwait and Oman. Furthermore, the Ayatollahs’ advanced non-nuclear capabilities could solidify the expansion from Iran through Iraq and Syria to Lebanon and the Mediterranean; dominate the Persian Gulf and the Arabian Peninsula along with the critical straits of Hormuz (Persian Gulf) and Bab al-Mandeb (Red Sea); intensify global Islamic terrorism; exacerbate political and military subversion in Africa, Asia and Latin America; enhance the Ayatollahs’ impact on the flow and price of oil, which would bankroll Teheran’s megalomaniac regional and global aspirations.

8. The Ayatollahs’ nuclear capabilities may be required to extract further dramatic concessions from the US and NATO and rollback their military presence to their Western bases.

9. Against the backdrop of the Ayatollahs’ track record, tactics and goals, the architects of the July 2015 Joint Comprehensive Plan of Action (JCPOA) have failed to realize that peaceful-coexistence and compliance with agreements, on the one hand, and the nature of the Ayatollahs, on the other hand, constitutes a classic oxymoron. Moreover, leopards don’t change spots, only tactics. Therefore, they failed to include in the JCPOA the following elementary-preconditions to the Ayatollahs’ abundant economic benefits, which are required in order to transform the nature of the Ayatollahs and reach a constructive agreement:
*A permanent commitment to refrain from the development – or acquisition – of nuclear and other weapons of mass destruction (including ballistic missiles);
*The transfer of the complete research, development and production infrastructure of weapons of mass destruction to the USA (following in the footsteps of the December 2003 Libyan precedent);
*Terminating and dismantling all agencies and units involved in subversive, terrorist and military operations outside Iran;
*Uprooting the Ayatollahs’ K-12 hate-education and other forms of incitement (in mosques, media, etc.) against “apostates” and “infidels,” which have shaped the worldview of an increasing number of Iranians. This has, also, carved the roadmap to the attainment of the Ayatollahs’ super-goals, and has served as the production-line of soldiers, willing to sacrifice their lives on the altar of such goals.

10. The term “effective sanctions” against Iran, on the one hand, and global political reality, on the other hand, constitutes another oxymoron, playing into the hands of the Ayatollahs. The sanction-option will not divert the Ayatollahs from pursuing their megalomaniacal, principle-driven super-goal. It will not transform them into a peaceful-coexisting entity. Moreover, Russia and China (which consider the US an arch-rival), and some countries in Asia, Latin America and Europe, cannot be expected to implement anti-Ayatollahs sanctions in accordance with the US. At the same time, international deliberations over sanctions have provided the Ayatollahs more time to advance (and acquire) additional ballistic and nuclear technologies

12. Preemption/prevention – and not deterrence or retaliation – may be the only effective means to spare the US and the globe the devastating cost of a mega-military confrontation against the Ayatollahs.

13. An effective preemption should not be limited to critical nuclear facilities, but should simultaneously devastate Iran’s missile and air defense capabilities, thus minimizing the scope of Iran’s potential retaliation.

14. An effective preemption must not involve the occupation of Iran, thus distinguishing itself from Iraq’s 1980 invasion of Iran, which coalesced all Iranians against a threat to their sovereignty.

15. An effective preemption would provide a tailwind to the substantial domestic opposition, which was disillusioned by the lack of Western support in 2009. A credible threat to topple the regime, and not diplomatic engagement and appeasement – perceived by the Ayatollahs as battle fatigue and retreat – is required to uproot the Ayatollahs’ core ideology and policy.

16. The cost of military preemption would be dwarfed by the cost of a confrontation with a ballistic and/or nuclear Iran. The Ayatollahs regime which sacrificed 500,000 of its own children in order to clear minefields, during the 1980-1988 war against Iraq, is capable of pursuing its megalomaniacal goal, irrespective of the cost.

17. The elimination of the Ayatollahs’ clear and present threat to the national and homeland security of the US, the pro-US Arab regimes, the Middle East at-large, including Israel, NATO countries and the rest of the globe, constitutes a most crucial test for the leader of the Free World: the USA.

*Will the USA avoid the devastating pitfalls of the JCPOA (please see item #8)?”

*Will the USA approach the Ayatollahs realistically, insisting upon a thorough transformation of the Ayatollahs’ domestic, regional and global nature?

*Will the USA and the Free World be willing to demonstrate their willingness to pay a price – if necessary – for sparing themselves the terrorism, conventional and nuclear wrath of the Ayatollahs?

*Will the USA sacrifice wishful-thinking, oversimplification and short-term gratification on the altar of realism, complexity and long-term homeland and national security?