Europe wants unity on Iran while undermining Trump on Jerusalem 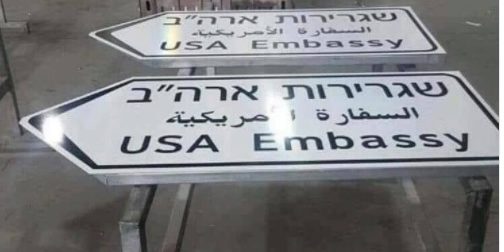 As French President Emmanuel Macron and German Chancellor Angela Merkel beat a path for the White House in back-to-back visits this week, the media coverage of U.S. – European Union relations is focused on efforts to convince President Donald Trump to keep faith with his predecessor Barack Obama’s nuclear deal with Iran.

Left largely unreported is that while the European leaders are is pressuring Trump to align his Iran policy with theirs, Macron, Merkel, and European Union Foreign Policy Commissioner Federica Mogherini are waging a multifaceted campaign to undermine and discredit one of Trump’s most significant foreign policy initiatives: namely, Jerusalem.

Since last December 6, when Trump officially recognized that Jerusalem is Israel’s capital and announced his intention to move the U.S. embassy from Tel Aviv to Jerusalem, Macron, Mogherini, and Merkel have been leading a major effort to undermine his policy.

On May 14, Treasury Secretary Steve Mnuchin is set to lead a 250-member American delegation to Jerusalem to participate in the opening of the U.S. embassy in Israel’s capital. Forty lawmakers and other senior officials, reportedly including President Trump’s senior advisors Ivanka Trump and Jared Kushner, are also set to join. Vice President Mike Pence and UN Ambassador Nikki Haley may join the delegation as well.

Merkel, Macron, and Mogherini lobbied hard to convince Trump not to honor his campaign pledge to move the U.S. embassy to Israel’s capital. All three warned that any change in U.S. policy on Jerusalem would destabilize the region in a dramatic way. Yet, as the Meir Amit Intelligence and Terrorism Information Center reported, there was no significant increase in Palestinian violence against Israel in the six months following Trump’s announcement over the six months that preceded it.

When, unmoved by their fear-mongering, Trump went forward with his determination to recognize Jerusalem last December, Merkel, Macron, and Mogherini led the charge in condemning his move. Media reports indicate that key Arab states Saudi Arabia and Egypt have prevented major criticism of the U.S. move domestically. But in striking contrast, the EU has gone to great lengths to keep the criticism on a high flame.

In late December, EU members France, Britain, the Netherlands, and Sweden joined the other ten UN Security Council members – aside from the U.S. – in voting in favor of a draft resolution demanding that the U.S. cancel its recognition of Jerusalem and retain its embassy in Tel Aviv. The U.S. stood alone in opposing the resolution and vetoed it in a 14-1 vote.

Unperturbed by the veto and by Ambassador Haley’s angry reaction, two days later, led by France and Germany, 23 EU member states voted in favor of a General Assembly resolution declaring the U.S. policy “null and void.”

The U.S. is not without its allies in Europe.

Out of respect for the U.S., five EU member states — Romania, the Czech Republic, Latvia, Hungary, and Croatia — defied Brussels and abstained from voting in favor of the General Assembly resolution.

“Yesterday the government adopted a memorandum deciding to start the procedure to effectively move the embassy from Tel Aviv to Jerusalem,” he said.

Mogherini and her colleagues were not amused. Israel Radio reported Saturday that Mogherini berated Romanian President Klaus Ionhannis and demanded that the government abrogate its decision. Israel Hayom reported that she acted in a similar fashion in meetings with Czech Prime Minister Andrej Babis.

A few days before she put the screws on the Romanians and Czechs, Mogherini attended the Arab League summit in Dahran, Saudi Arabia, rallying the Arabs to stand against America’s decision to move the U.S. embassy to Jerusalem.

Echoing the position of UNESCO — the UN’s cultural organization, which rejects any Jewish ties to the city that has served as the Jewish spiritual capital for more than 3,000 years — Mogherini said, “As Europeans and Arabs we share in particular an interest in preserving the unique status of our common Holy City, Jerusalem.”

In her speech to the General Assembly following its adoption of the anti-American resolution last December, Haley noted that President Trump’s decision to move the U.S. embassy to Jerusalem “reflects the will of the American people and our rights as a nation to choose the location of our embassy.” She deplored the General Assembly move to “single out” the U.S. for “exercising our rights as a sovereign nation.”

Haley opened her speech by drawing a parallel between UN’s institutional discrimination against Israel and its singling out the U.S. for rebuke over its decision to move the U.S. embassy to Jerusalem.

The EU’s behavior has been particularly noteworthy in this regard.

The EU’s efforts to undermine American policy regarding Jerusalem are not limited to anti-American votes at the UN, or bids to scuttle support for the U.S. move among EU member states.

This week, the Israeli media reported that an EU-funded and Israeli registered anti-Israel non-governmental organization (NGO) called Ir Amim (City of Nations) has petitioned Israel’s High Court of Justice to block the opening of the U.S. embassy in Jerusalem. It has listed the State Department as a defendant.

Ir Amim’s petition asks the court to block the embassy opening due to planning and building exemptions that Israel provided the U.S. government to expedite construction activities related to converting the U.S. consulate in Jerusalem into the U.S. embassy. But while its formal argument is environmental and procedural, in its public statements, Ir Amim insists that its goal is political. So long as the U.S. does not open an embassy to “Palestine,” in Jerusalem, it shouldn’t be permitted to open its embassy to Israel in the city, according to Ir Amim.

For years, the EU has been spending millions of euros annually to fund the operations of anti-Israel NGOs. One of the major tactics these groups use in their anti-Israel – and EU-funded – activities is lawfare, and one of the favorite arenas for lawfare is Israel’s Supreme Court.

Israel’s Supreme Court has always had an unusual amount of power. Alone in the Western world, Israel’s Supreme Court sits as a court of first and last resort for any complaints against any government action that a petitioner claims is “unjust.” In the early 1990s, the Court expanded its powers by deciding that even without any plausible legal interest, petitioners could expect a ruling on the most political of matters. At the same time, the Court determined that it had authority to overturn parliamentary legislation that it found contradicted basic legal principles — as decided by the judges.

The Court was well aware of the revolutionary nature of its seizure of power. Justice Aharon Barak, later to become the radical President of the Court, depicted the Court’s new approach as part of a “constitutional revolution.”

Seizing on the opportunity to undermine Israeli policymaking that Barak created, the EU began pouring millions and millions of dollars into newly formed radical NGOs to finance their operations. Over the years, EU-funded NGOs have turned to the High Court to undermine government policies on everything from counter-terrorism, to immigration policy, to land policy, and to enforcement of planning and zoning laws and regulations.

The EU has hoped to undermine Israeli policy not just by changing its results, but also by creating judicial roadblocks that would disrupt Israeli decision-making and create a “blockage.”

While there is nothing new today about the EU’s practice of using the unchecked power of Israel’s Supreme Court, it is remarkable that they are exploiting it to try to subvert U.S. foreign policy.

As Prof. Eugene Kontorvich from Northwestern University, who directs the International Law Department at Kohelet Policy Forum in Jerusalem, explains, “In this absurd lawsuit, an EU-funded organization is trying to use Israeli courts to block the U.S.’s exercise of its core sovereign prerogatives. In essense, EU agents are using the imperiousness of the Israeli judicial system to block U.S. foreign policy with which it happens to disagree.”

Kontorovich noted that “Ir Amin is almost certain to lose even in Israeli courts.” But as Steinberg points out, the purpose of the petition isn’t to block the embassy move, per se.

It is to embarrass the U.S.

“Let’s assume that the Court is wise enough to dismiss their petition, Steinberg begins, “Ir Amim still gets the publicity.

On Tuesday it was reported that European pressure on the Trump administration to suffice with symbolic changes to the nuclear deal with Iran while keeping the substance of the agreement unchanged is making headway. President Trump is now weighing good relations with Europe over the need to block Iran from acquiring the means to wage nuclear war.

As he does so, the president should bear in mind that the same European leaders that are calling for “unity” on Iran are carrying out a multilayered campaign across several continents to undermine his most significant foreign policy achievement since entering office. They are seeking to undermine President Trump’s recognition of Jerusalem as Israel’s capital.