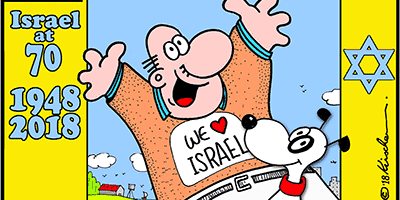 For me, as an Israeli, the country’s most impressive achievement as it approaches its 70th birthday is that modern Israel has not only survived attacks by its many Arab and Muslim enemies, but also prospered in roughly the same location as the ancient Jewish kingdoms of Israel and Judah.  In 70 A.D., the 1,000-year-old Jewish state with Jerusalem as its capital and the Second Temple at its center was invaded, conquered, and destroyed by the Roman Empire.  Now the new modern Jewish state is celebrating 70 years of existence while the Roman Empire as well as many other conquerors of the land of Israel during the last 3,000 years have disappeared.  If past history is an indicator of future events, the Jewish state will outlast its modern enemies who rose during the last century to destroy it and become more powerful than one could possibly imagine.

For over 3,000 years, the land of Israel came under the rule and conquests of many empires such as the Babylonians, Assyrians, Persians, Greeks, Romans, Byzantines, Arab caliphates, Crusaders, Mamelukes, Ottomans, and British, but it is only the Jews who have continuously inhabited the area, the only ones who have ever established an independent state with its capital in Jerusalem.

When waves of Jewish immigrants escaping anti-Semitism in Europe came to the land of Israel at the end of the 19th century, the land was mostly empty, barren, desolate, and uninhabitable.  When my mother emigrated to Israel, under British rule in 1936, she came in the midst of waves of violence and massacres committed by local Arabs against the Jews who had been working over 50 years to cultivate the land by drying the swamps; planting trees; and building hospitals, roads, factories, and universities.  In November 1947, the entire Arab world joined the local Arabs in rejecting the U.N. partition plan.  The Jews accepted the plan, which created an Arab state alongside a Jewish state in the area west of the Jordan River.  While the Jews, including my parents, were rejoicing and dancing in the streets, the Arab world was contemplating the destruction of the new nation.

On May 15, 1948, the Arab assault on Israel began hours after David Ben-Gurion, the first prime minister of Israel, declared Israel’s establishment one day after the British armies left.  Five Arab armies from Egypt, Jordan, Syria, Iraq, and Lebanon invaded the new state from all sides along the entire border, with artillery, armored battalions, and fighter-bombers, while the local Arabs were fighting in the interior of the country.  One Egyptian fighter-bomber that attacked Tel Aviv killed my father’s 15-year-old brother.  My father, alongside his other brother, was involved in the fighting against the local Arabs in Jaffa, which came under Israeli control.  Israel was able to defeat the combined Arab armies, but the Arab Legion of Jordan, led by a British commander, was able to conquer the West Bank and East Jerusalem, including the Old City and all the Jewish holy sites.  Over 6,000 Israelis, 1% of the entire Israeli Jewish community, died in the war.

When I was born in 1959, Jerusalem was a divided city, and Jews were not allowed by the Jordanians to visit or pray at their holy sites.

Prior to 1967, as a child, I used to visit my grandfather who lived on Mamilla Street in Western Jerusalem, very close to the no man’s land outside the Jaffa Gate in the Old City.  It is hard to believe that from May 27, 1948, through June 7, 1967, Mamilla was Israel’s frontline and the border of Israel with Jordan.  The western three quarters of Mamilla were held by Israel, and the eastern quarter became a wasteland of barbed wire and concrete barricades between the Israeli and Jordanian lines.  At the time, Jordanian snipers stood on the top of the Old City walls and tried to shoot any Israeli in West Jerusalem down below.  As a four- to seven-year-old kid, I used to crawl out of my grandfather’s house to avoid being randomly shot at by snipers for being Jewish, and then had to run quickly to avoid being shot at.

On June 5, 1967, Israel was forced into a war against the combined armies of Jordan, Egypt, Syria, and Saudi Arabia, and the Six-Day War began.  Miraculously, the Israeli Army defeated the combined Arab armies, conquering the West Bank and Eastern Jerusalem, including the Temple Mount and the Western Wall, from the Jordanians.  After 2,000 years, we were again free to pray in a united Jerusalem.

On October 6, 1973, the Egyptian and Syrian armies launched a coordinated fourth war against Israel on Yom Kippur, the holiest day in the Jewish calendar, when many of Israel’s soldiers were away from their posts observing the Day of Atonement by fasting.  Taking the IDF by surprise, they made territorial advances deep into the Sinai and Golan Heights, inflicting heavy casualties.  It took days for the Israeli Army to mobilize its soldiers and counterattack to recapture the lost territory.  I was 14 at the time and just starting high school when all the men in the neighborhood, including my three brothers, were called to join the fight.  My new high school gym teacher, whom I had known for only a month, was killed in that war.

Since then, Israel has never been attacked by Arab states but has been repeatedly attacked by Arab terrorist groups such as Hezb’allah from Lebanon and Hamas from Gaza, using missiles and rockets, as well as by the PLO in the West Bank using such tactics as suicide bombers, knives, and car-ramming, which have taken the lives of thousands of Israeli civilians.  In a country of 6.5 million Jews, 23,646 Israeli soldiers have fallen, and 3,117 victims of terrorist attacks have died.  In memory of the fallen, places of entertainment in Israel are shut down for 24 hours, and radio and TV stations air documentaries about the fallen soldiers and terror victims.  More than 1.5 million Israelis are expected to visit Israel’s 52 military and other cemeteries throughout Memorial Day, while sirens will wail twice across Israel as cars and residents stand still.

As Israel is celebrating its 70th birthday, the bad news is that it is still resides in the most dangerous and unstable neighborhood in the world, facing many enemies who wish to destroy it.  The Arab public still hates the Jewish State even though its leaders are reconciling themselves to its existence, fearing Iran even more.  The Arab armies’ threat has been succeeded by the Iranian aspiration for regional domination and its axis of evil such as Hezb’allah, Hamas, Shiite-controlled Syria and Iraq, and its Shiite militias.  Moreover, Israel is facing Sunni Islamist jihadists and the Palestinians who have returned to attack Israel by themselves and through the BDS movement and the U.N.

The good news is that Israel maintains its military superiority and economic prosperity in the Middle East and its ability to deter its enemies, with its willingness and capability to independently take aggressive and deadly actions, even at the risk of escalation.

The ugly news is that there is a high probability that Iran, its proxies and the Arab world will try to develop and be willing to use chemical and nuclear weapons against Israel and the Western world.

In the short term, Israel’s hope is that the Trump administration will abolish the Iran nuclear deal, reimpose suffocating sanctions against Iran, and if necessary be willing militarily to work with Israel to curtail the threat.  Hopefully, in the next 70 years, future American presidents will preserve and enhance the beautiful friendship and alliance between America and Israel.  Happy 70th birthday, Israel!

Shoula Romano Horing is an Israeli born and raised Attorney. Her blog: www.shoularomanohoring.com.