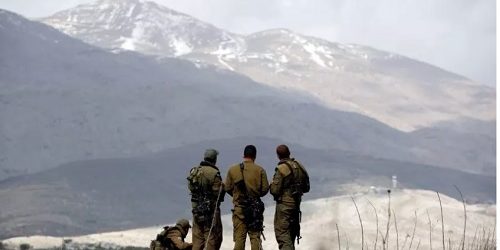 The Syrian Tiyas Military Airbase, located in the Homs province, was struck by several missiles on Monday, Syrian media reported.

According to reports, at least 14 were killed in the strike and several others were wounded. Some reports say that over 20 missiles landed in and around the base. Syrian media claimed that Syrian forces were successful in intercepting eight missiles.

The Syrian Observatory for Human Rights (SOHR), which has operatives inside Syria, reported that “Syrian and non-Syrian nationalities” were killed in the strike. The “non-Syrians” likely refers to Iranians.

Syrian media initially blamed “American aggression,” but the Pentagon has denied any involvement in the strikes. Syria then pointed its accusatory finger at Israel.

The IDF has remained silent on the reports, as has been its conduct in most previous, similar incidents.

The Russian Defense Ministry on Monday issued a rare statement blaming Israel for the attack. It said that two IAF F-15 jets fired the missile at the Syrian airbase from Lebanese airspace. The Ministry also claimed that the Syrian air defense destroyed five of the missiles fired by the IAF, while three other missiles hit the western part of the T4 airfield.

No Russian servicemen were hurt in Israeli airstrike, the Ministry stated.

The Russian chairman of the Federation Council Committee on International Affairs, Senator Vladimir Dzhabarov, stated that if the Israeli strike in Syria was “unprovoked,” it “may complicate” the situation in Syria, and that “the cause of the attack should be clarified.”

The T-4 Airbase was hit by the Israeli Air Force (IAF) in February. The incident began when an Iranian UAV on its way into Israeli airspace was shot down by the IAF once it reached Israeli territory. In response to the Iranian violation of Israeli sovereignty, IAF jets flew deep into Syria to hit the drone’s launch and control center at the T4 base. Several Iranian soldiers were reportedly killed in the attack.

Israel has repeatedly stated that it will not allow Iran to establish itself militarily in Syria. Iran is working to take over Syria and turn it into a hub for terrorism, and Israel will not tolerate it, Ambassador Danny Danon told the United Nations (UN) in March.

The missile attack followed a suspected poison gas attack on Saturday on the last remaining foothold for Syrian rebels in the eastern suburbs of Damascus, which killed some 200 people.