The world goes for Israel’s throat 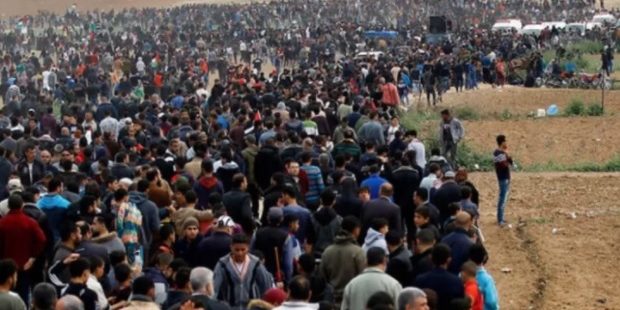 All the hypocrites of the world are now at Israel’s throat.

The satrap Erdogan, who slaughters the Kurds, who invades Afrin, who persecutes Christians and who occupies Cyprus, has the nerve to accuse Israel of “terrorism” in Gaza. At least 289 and more likely 500 people have been killed since Turkey launched its jihad against Afrin and Erdogan allows himself to give ethical lessons to Israel.

But in some perverse way, Erdogan is right: Those who did not condemn the Turkish invasion and massacres in Afrin, took two minutes to turn Israel into a Nazi at the border of Gaza for defending itself. At the UN, if there were no Americans to veto the resolution, Jerusalem would be prosecuted like the Nazis in Nuremberg. The UN Security Council met “urgently” on Friday night, despite American and Israeli requests to postpone the meeting because of the Passover Seder. They are very hurried when it comes to defaming Israel, but slow as sloths when it comes to Syria, North Korea, Iran.

Meanwhile, the EU, with Federica Mogherini, who has said nothing about the deaths and tortures and those arrested in Iran, calls for an “independent investigation” on Gaza, without mentioning the crimes of Hamas. The Palestinians should have tried to break through the borders of Turkey, Egypt, Iran or Syria. Instead of 16, there would have been 3.000 deaths. And all civilians. Hypocrites!

Then Pope Francis, in his speech before the blessing Urbi et Orbi said that “the Holy Land is wounded by open conflicts that do not spare the defenseless”.

It is right to complain about the loss of life in Gaza. But it would have been correct only if he had reminded the Hamas terrorists to stand alongside the “defenseless”. The “march” of Hamas against Israel was so defenseless that the leader of the Islamists of Gaza Sinwar said that “we will eat the livers of the Israelis”. The livers … Those who slander Israel, without denouncing the terrorism that for 70 years wants to throw the Jews into the sea, accept a role in the choreography of terror set up by those who want to “eat the livers of the Israelis “.

If the 30.000 Palestinians were allowed to cross those borders, instead of dead terrorists, we would have had dead Israelis. Would the world be more satisfied?

The mainstream media have written horrible and ridiculous lies talking about “slaughter” and “massacre”. Within hours, on the basis of falsehoods and prejudices acting like a fever, Israel was lynched, tried and sentenced to the gallows by public opinion, much of it due to the TV and newspapers.

Today I am ashamed of my profession.

Israel has the right to use force to defend its citizens and borders from terrorists.

Hamas has launched thousands of missiles on Israeli cities.

Hamas has unleashed three wars against Israel in ten years.

Hamas has transformed Gaza into an Afghanistan on the Mediterranean.

This is why Europe has included Hamas in the terrorist list. Israel has rights to the naval blockade of Gaza and to seal its borders and to defend them from those who want to destroy the Jewish State.

In the last war, Palestinian terrorists used the tunnels to enter Israel in order to kill soldiers and civilians. Most of the participants in yesterday’s clashes were women and children, human shields, but all the victims are male, aged between 18 and 30, and have been directly involved in terrorism.

What would Western countries have done if ISIS had organized such a demonstration in Calais or Melilla, the most fragile borders of France and Spain? Hamas and ISIS are children of the same Islamist evil. Both use civilians as human shields. Instead of education, they have marches on the borders. Instead of infrastructure, they have tunnels and missiles. There is no “occupation” in Gaza since 2005. But Hamas wants everything, Ashkelon, Jaffa, Jerusalem. That’s why they want to break through Israeli borders by marches and through tunnels.

All over the world people protest with signs and slogans. In Gaza they do it with Molotov cocktails and rifles. But they will not succeed. Israel’s ability to “hold” is unique in the world. What other democratic and Western state would resist in Israel’s place? None.