IDF chief: The likelihood of war has increased substantially 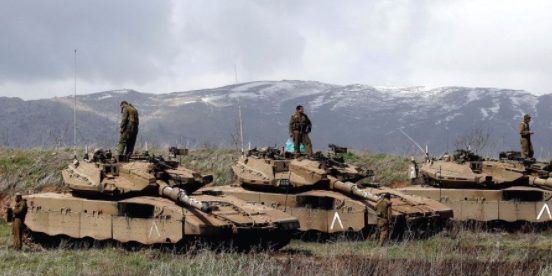 “If the Palestinians think that they will organize a march and cross the fence into our territory, they are wrong,” IDF Chief of Staff Gadi Eizenkot tells Israel Hayom in a special holiday interview. “We will enforce with an iron fist to prevent it. Haniyeh and the ones who send will be responsible for whatever happens.”

The military chief explains that beyond deploying reinforcements to the border area ahead of a planned March 30 Hamas-led march towards the fence, the military was also mentally preparing troops for the expected clashes in southern Israel, and in Judea and Samaria. “We are laying down infrastructure that will pose obstacles, but if you look at the bigger picture, you realize that you are in the middle of a very complicated reality where a lot of negative vectors converge. It makes for a very volatile situation over the next two months.”

Q: Can you describe what these vectors are?

A: “The failure of the reconciliation efforts; the imminent end of the age of Palestinian Authority Mahmoud Abbas; the deep undercurrents in the Palestinian public, particularly in the West Bank, of increasing support for violent resistance; and a realization that the non-violent path led by Abbas is leading nowhere. Add to this the terrible civilian-humanitarian crisis in Gaza and Hamas’ failure to govern, the cold shoulder from Egypt, the relocation of the U.S. Embassy from Tel Aviv to Jerusalem, the poor water quality, the power shortages, the cutbacks in health spending and the cuts to UNRWA funding—200,000 Gaza children attend UNRWA schools, and 65 percent rely on them for food.”

Q: Is this a recipe for inevitable escalation?

A: “We already said at the beginning of the year that the likelihood that any of our enemies will initiate confrontation is rather low. But the likelihood of escalation, to the point of war, has increased substantially, even though neither side is interested in confrontation. Our goal in Gaza is to maintain the current reality at least until the end of the year, to give us enough time to complete the infrastructure to combat the terror tunnels. But if we’re being honest, we have to admit that the possibility of being dragged into violence is much more likely today than in the preceding decade.”

Q: So that means we are on the verge of the next war.

A: “Ever since 2005, the cycles of fighting have been short—every one or two years we had something. In the last four years, the security situation has been better than it has been since 1967. In this time, not a single Israeli civilian has sustained as much as a scratch, and only five soldiers were wounded. The communities are enjoying a period of calm.

“So on the one hand we have a strong power of deterrence—the people in Gaza are terrified of escalation and what it would imply—and on the other hand, life there is hell, so we can’t threaten them with ‘double hell’ because they are already desperate and hopeless.”

Q: So what is the answer?

A: “I think that it is in Israel’s best interest that they have hope, and want to get up in the morning and go to work. We were very close to a third intifada in 2015, and it was averted mainly because we made a clear distinction between terrorists and the general population. We fought a determined war against terrorism, but refrained from harming the population. In recent years, every morning, some 190,000 Palestinians wake up and go to work in Israel. They make a living and the mechanism works—education, local government. That’s the difference between the West Bank and Syria.”

Q: And still, they support Hamas.

A: “Hamas has entered the people’s hearts. I would very much like to root it out, but people believe Hamas and identify with the movement. In Gaza, they behave like dictators; it’s catastrophic there. They throw their opponents off rooftops, they rule with an iron fist and only take care of their friends and families. And still, there are no protests. The street doesn’t erupt because the people believe that everything is determined by Allah and that it’s all Israel’s fault and that even if things are bad now, tomorrow they will be better.”

Q: Do you envision an eruption in the future?

A: “It is certainly tense. On the one hand, they realize that they are facing a powerful foe they cannot defeat. On the other hand, they hate us very much and want desperately to hurt us. You see the highest motivation for this among those who live among us, in Judea and Samaria, because they come into direct contact with us at eye level.

Q: Is this motivation reflected in the intelligence you are able to gather?

A: “Certainly. There is immense motivation to perpetrate terrorist attacks. The main problems are hatred, willingness, the culture, the religious beliefs and the profoundly painful understanding that they strongly believe terrorism is a way of fulfilling political, social and religious desires. This is something that won’t change for many years to come.”

Eizenkot says that while the greatest threat currently facing Israel is Iran, the most volatile threat is the Palestinian one, coming both from Gaza and the West Bank. “The hatred toward Israel isn’t new; it existed 70 years ago too, and will continue to exist 100 years from now,” he says. “When I was asked to speak at an international counterterrorism conference, I researched and found that the first terrorist attack on record in Israel was in 1851. The fundamental hatred and the drive for confrontation are here to stay. What has changed is that we developed a system.”

Q: The region has changed. Today, there is a Russian presence, for example. Would the Russians have allowed Israel to strike a reactor in Syria?

A: “They wouldn’t have liked it, but they would have allowed it. I was present at the meeting between the prime minister and the Russian president, and I know what was said. They made it clear that we are an ally and that we both have interests. We need to operate to advance our interests and ensure that theirs aren’t harmed.”

Q: Where do the Russians draw the line?

A: “They have radars that identify everything. But they understand that we are not fighting against them. We need to make sure not to harm Russian forces, so we built a mechanism to prevent friction.”

Q: Is the same true for Iran?

A: “It’s no longer a secret that we are targeting Iranian capabilities. The Israeli public became aware of Iranian capabilities in Syria six months ago. As far as the IDF is concerned, this started years ago, and we are working to prevent it. We are also preventing Hezbollah from gaining advanced capabilities. That fact that Hezbollah can’t hit a precise target in Israel from Lebanon is solely thanks to our efforts. The Israeli public is unaware of most of these things.”

Q: What is Iran trying to achieve?

A: “Regional hegemony. Control. In recent years, Iran has given Syria $1 billion, and every year it hands over $600-700 million to Hezbollah, another $100 million to Gaza and hundreds of millions to the Houthis in Yemen. It destabilizes the region. Our goal, which we share with the Sunni countries of the region, is to push them back to Iran and hope that their internal reality there will change. “The Iranian Revolutionary Guard has in effect built a state within a state, but when you look at long-term processes in Iran, there are large factions that want to live. To a large extent, some of the processes unfolding there, like the clash between the religious and the secular, are reminiscent of processes in Israeli society. There are deep undercurrents there and I believe that there will be change in Iran.”

Q: How far are we willing to go to prevent Iran from establishing a foothold in Syria?

A: “The military’s policy is to take every action necessary to push them out of Syria and back to Iran. I think that there is room for more action, including to enlist the help of the U.S. and Europe, where we have seen less success. We need to explain to them that they defeated ISIS, but they allowed an even bigger demon to take hold in the Middle East. A Shiite hegemony in Syria will be very bad for Israel, but it will be even worse for Europe.”

A: “Because the millions of displaced Sunnis will not flee to Israel. They will flee to Turkey and from there, to Europe.”

Q: What is the solution in Syria?

A: “Anyone who thinks that they will see democracies or Western lifestyles in the Middle East in the near future must come from another planet. They are delusional. In my view, the only options for an Arab culture can be a religious elite, a military elite, a monarchy or chaos. There are no other possibilities. Our experience teaches us that wherever the system is overthrown, we get a far worse alternative. It’s not that the reality under Gadhafi or Saddam Hussein was delightful, but there was rule of law. There was order. There was someone to talk to. But then you introduce Mecca, you end up with ISIS and a chaotic reality that will take decades to get under control.”

Q: Does that mean that you think Syrian President Bashar Assad should remain in power?

A: “As an Israeli chief of staff, I can’t support a leader who is a murderer, and who uses chemical weapons on his people, and whose actions have resulted in hundreds of thousands of deaths and more than 2 million wounded. But still, our interest is to have someone we can talk to, and to have functioning government mechanisms. That is true in Syria; it’s true in Gaza as well. We can overthrow Hamas in Gaza, but what then?

“The Syria that we knew in the past has collapsed. It won’t return. Our objective is to achieve a solution that will be founded on ethnic identities—maybe some sort of confederation of several states: Alawite, Sunni, Druze. I think that would be good for Israel, because it will defuse Syria’s contrarianism against us.”

A: “The best scenario isn’t realistic: to attach Gaza back to Egypt. Barring that, the choice is between equally bad alternatives—an indirect truce with a Hamas government or a reconciliation between Gaza and the West Bank. The worst scenario is that everything will break down there, and a chaotic reality will emerge. What we need to aspire to is a moderate government there that will agree demilitarize, but we are not there.”

Q: We are coming up on Israel’s 70th Independence Day. Are we here to stay? And to win?

A: “Not because it is the right thing to say, but because I know very well our power and our abilities. To its enemies, Israel is invincible. We have superiority in intelligence, in the air, in the sea, on the ground and enormous deterrence. I don’t see any existential threat in the coming years, and our duty to future generations is to make every effort to prevent such existential threats in the future. But we must always remember that in order for the IDF to continue fulfilling its purpose and serve as Israel’s insurance policy, we must have the public’s support. The only potential setback that I can foresee is if the internal unity of the army is compromised or if our mutual responsibility towards each other falters.”