Hamas leader: Protests mark the beginning of our return to ‘all of Palestine’ 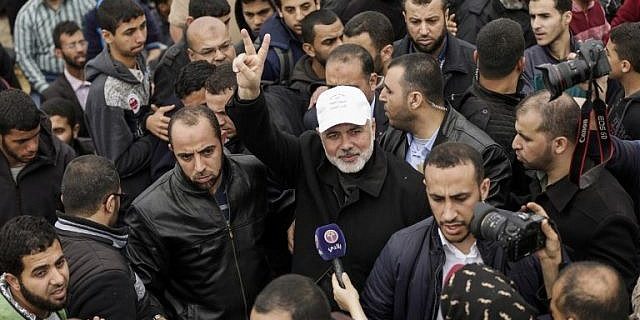 Demonstrations Friday along Israel’s border with the Gaza Strip mark the beginning of the Palestinians’ return to “all of Palestine,” Hamas leader Ismail Haniyeh said in a speech at the scene.

“We are here to declare today that our people will not agree to keep the ‘right of return’ only as a slogan,” he said. Haniyeh added that the so-called “March of Return” was also aimed at sending a message to US President Donald Trump to the effect that the Palestinians will not give up their right to Jerusalem.
His comments came as several Palestinians were reported killed and hundreds were wounded by Israeli live and rubber bullet fire in border clashes as a series of massive protests kicked off along the security fence surrounding Gaza, according to Palestinian sources.

Thousands of Palestinians massed at the Gaza border to take part in the “March of Return” protests, the Israel Defense Forces said, with more expected to participate throughout the day. The army said it fired on “instigators” of protests at the border fence. An Israeli TV report said one of the Palestinians killed was suspected of trying to plant an explosive device at the fence.

Organizers of the protest had claimed it would be peaceful, but Israeli officials and the IDF had braced for the anticipated flare-up along the border of the Hamas-run enclave.

The main sites for protests at or close to the Gaza border were at Rafah and Khan Younis in the south, el-Bureij and Gaza City in the center, and Jabalya in the northern portion of the coastal enclave.

The military said protesters were burning tires and throwing rocks at the soldiers on the other side of the security fence.

Israeli officials repeatedly warned Palestinians not to approach the security fence during the protests through social media, leaflets dropped from airplanes and statements to news outlets.

Hamas leaders had said in the past few days that the protests would be “peaceful” and “non-violent.” However, they also warned that Palestinians will not sit idly by if Israel used force to disperse the protesters.

A statement issued by Hamas, a terror group that seeks to destroy Israel, on Thursday called on Palestinians “to effectively take part in the Great March of Return and remain peaceful to achieve the objective of this event.”

Khalil al Haya, a senior Hamas official, said that the Palestinians were not afraid of Israel’s threats to stop the demonstrators from approaching the border.

The Palestinians are determined to return to their lands and homeland, Haya said, during a tour of tents set up by the protesters near the border with Israel. The Palestinians refer to the tents as the “Tents of Return.”

“Our people will not be intimidated by the Israeli threats,” he said. “We have waited for too long to return to the lands from which our grandparents were expelled 70 years ago.”

At previous peace talks, the Palestinians have always demanded, along with sovereignty in the West Bank, Gaza, East Jerusalem and the Old City, a “right of return” to Israel for Palestinian refugees who left or were forced out of Israel when it was established. The Palestinians demand this right not only for those of the hundreds of thousands of refugees who are still alive — a figure estimated in the low tens of thousands — but also for their descendants, who number in the millions.

No Israeli government would ever be likely to accept this demand, since it would spell the end of Israel as a Jewish-majority state. Israel’s position is that Palestinian refugees and their descendants would become citizens of a Palestinian state at the culmination of the peace process, just as Jews who fled or were forced out of Middle Eastern countries by hostile governments became citizens of Israel.