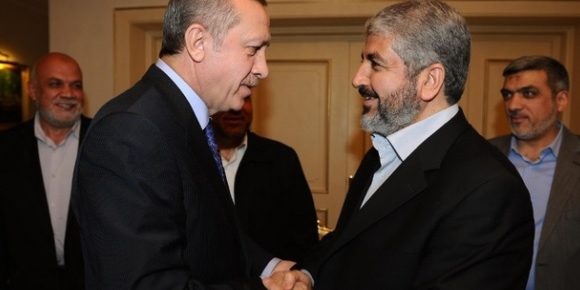 Hamas has bolstered its relations with Iran and Hezbollah and is consulting with Russia and China as part of an effort to thwart US President Donald Trump’s yet-to-be-announced plan for peace in the Middle East, Palestinian sources in the Gaza Strip said Thursday.

“Hamas is working to forge a Palestinian-Arab-Islamic alliance that would be able to confront Trump’s plan,” a source said.

“Discussions with Iran and Hezbollah on this matter have gone a long way.”

The sources in the Gaza Strip told the London-based Al Hayat newspaper that the discussions between the three parties — Hamas, Iran and its Lebanese proxy Hezbollah — were based on the belief that Trump’s plan, which he has described as the “deal of the century,” was the “most dangerous” in the history of the Israeli-Arab conflict.

It was not immediately clear what type of pushback effort the three would mount in opposition to the US proposal, which reports have indicated is nearly finished.

Hamas is also conducting consultations with Arab, Islamic and foreign parties, including Russia and China, to discuss ways of confronting Trump’s peace plan, the sources said.

Hamas’s increased isolation, and the failure of its “reconciliation” deal with Palestinian Authority President Mahmoud Abbas’s ruling Fatah faction, are likely to push the terror group closer to Iran and Hezbollah.

Abbas’s Palestinian Authority has previously accused Iran of meddling in the internal affairs of the Palestinians by supporting the terror group that rules the Gaza Strip.

Moussa Abu Marzouk, a senior Hamas official, was quoted last week as saying that his movement’s relations with Iran were “excellent.”

Referring to Iran, he said no one had the right to blame Hamas for dealing with any party that is willing to collaborate with his group.

Iran has been helping Hamas at a time when many others had failed to do so, Abu Marzouk said in an apparent reference to financial and military aid that the Iranians have been providing to his terror group since it violently seized control of the Gaza Strip in 2007.

Hamas’s relations with Iran were approaching the point where they were before the eruption of the civil war in Syria, he added. However, Hamas still hasn’t studied the issue of restoring its ties with the Syrian regime, Abu Marzouk clarified.

Relations between Iran and Hamas hit a snag following the latter’s refusal to support the regime of President Bashar Assad, a major ally of Tehran, against the opposition when the civil war broke out in Syria in 2011.

The Syrians subsequently closed the Hamas office in Damascus and ordered the group’s leaders, including Khaled Mashaal, to leave the country.

In recent months, Hamas officials have held a series of meetings with Iranian and Hezbollah leaders in Tehran and Beirut in a bid to restore their relations with the two sides.

Late last year, a Hamas delegation headed by former West Bank terror chief Saleh al-Arouri visited Tehran and met with senior Iranian officials. Arouri said after the visit that the Iranian leaders affirmed their support for Hamas and the Palestinian “resistance.” The Iranians, he said, also pledged to increase their support for Hamas and other Palestinian terror groups.

Arouri later met in Beirut with Hezbollah Secretary General Hassan Nasrallah in the first high-level meeting of its kind between the two parties since the beginning of the civil war in Syria.

Osama Hamdan, Hamas’s de facto foreign minister, said that Iran’s relations with his group have “entered a new phase and were now more stable than ever.”