‘Trump is a modern-day Cyrus the Great’ 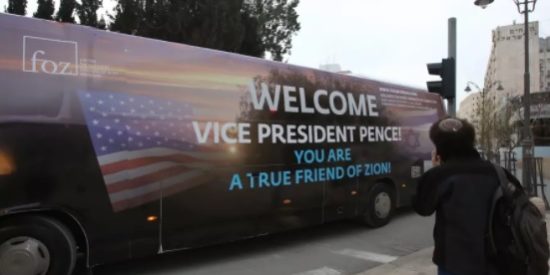 The promises he has kept in one year – we cannot imagine what he will do in four years, especially for the nation of Israel,” says Dr. Mike Evans, the founder of the Friends of Zion Museum in Jerusalem.

Evans, a Christian born to a Jewish mother, was responsible for making Trump’s presidential campaign such a hit among Evangelical Christians in the run-up to the last election. And that was no small feat. After all, Trump is not a classic conservative candidate: He lived his entire life in a liberal, New York environment, and he is currently on his third marriage. But Evans and the Evangelicals managed to make history.

Evans says that after the election, Trump said to him that he had God and the Evangelicals to thank for his presidential victory. That assertion appears to be true, at least the second part of it. It wouldn’t be wrong to say that the relatively high concentration of Evangelicals in key states was one of the main factors that contributed to his victory.

Q: Did you back Trump because he was the most authentic candidate?

“He is 100% authentic to a fault. He says what he thinks while 99% of all politicians are pretend. There is one politician for the camera and then the real guy. A very small number are authentic. We know him on a private basis.”

It comes as no surprise that Evans speaks about Trump with such admiration. He doesn’t hide the fact that he believes that Trump “is a modern day Cyrus the Great” who entered the White House because God wanted to help the Jews, among other things. Evans reminds me that Evangelical Christians love Israel because of a verse in the Book of Genesis in which God promises Abraham that anyone who helps the Jews will be rewarded and anyone who harms the Jews will be punished. “And I will bless them that bless thee, and him that curseth thee will I curse; and in thee shall all the families of the earth be blessed.” (Genesis 12:3)

When Trump visited Israel last May, Evans flooded Jerusalem with signs welcoming the American president and calling on him to “Make Israel Great Again.” When Trump announced on Dec. 6 that he was officially recognizing Jerusalem as the capital of Israel, Evans again posted signs on every street corner in the city (and even one on a camel).

The path to being such an avid Zionist started for Evans with a difficult family situation. When he was young, his father abused him and his mother. After one particularly serious abuse incident, in which Evans tried to come to his mother’s defense, his father beat him bloody and he passed out in a pool of his own vomit. When he regained consciousness, Evans decided that he had a divine duty to help the Jews so that they would not be as helpless as his mother. That is why he and his fellow Evangelicals travel the world and tell the story of Israel. But the most obvious manifestation of his mission is the museum he built in the heart of Jerusalem.

The museum serves as Israel’s secret weapon in the battle over public opinion. It tells the story of the Jewish people from a different angle, the Judeo-Christian angle. The museum points a spotlight on a number of Christian figures who helped the Jews throughout the generations and ensured that they were successful in realizing their national aspirations. These figures include Winston Churchill, Harry Truman, George Bush (the 19th century pastor and biblical scholar who is related to the presidential Bushes) and more.

To Evans, Israel is part of a divine promise that the Evangelicals have made sure to protect even in the most difficult of times. This, he says, is in contrast to the “fake Christians” – the Crusaders and others who persecuted Jews throughout history.

Q: What prompted the decision to launch this project?

“I was at the King David hotel with Netanyahu and for about an hour and a half we were having a conversation and I said: Talk to me about our base, the Christian Zionist. He said it is the most passionate base in the world, without them the State of Israel would never have been born, but he said, the base is not strategic. … Out of that came the inspiration for the Friends of Zion Heritage Center.”

“Because I realized that the number of Christian Zionists in the world is almost one billion, there are 750 million, and somebody needed to unite them, because Israel’s friends are exceedingly greater than its enemies. And Israel needs friends and that is why we came up with the brand Friends of Zion.

“This is the fastest growing Christian social network movement in the world. More than 50,000 a day. The power of this base cannot be measured. we are utilizing them as a strategic communication to educate and activate a generation of millenials. We are building a think tank here. There has never been a think tank for the Christian Zionists of the world to disseminate information.”

The Jerusalem Prayer Team, a digital platform Evans created for those who wish to pray for the Jewish people and the State of Israel, already has more than 34 million followers on Facebook.

Q: But Netanyahu had hoped that they would support the right side of the political spectrum. Didn’t he?

“Netanyahu knew they were already. They were the greatest supporters of Israel. He was just saying they are not really united and it was true. In Israel, the Jewish people have taken the time to create that cohesion. You have tons of think tanks and organizations with objections and goals and benchmarks. Why can’t we do that with this group globally?”

“So I was inspired by his words to create this. … I shared the vision with Shimon Peres, and he became inspired by it. He said it takes so much less energy to make friends than enemies and to sustain them. Let’s do this together. He and I traveled the world together and gave the awards together. It was a very interesting marriage. Because I come from the Right and he came from the Left. But the Shimon Peres that I knew in the last couple of years of his life was very very hawkish. He wasn’t anything like the liberal guy they tried to typecast him as. Extremely intelligent and wise and clever.”

I ask Evans how he plans to change the prevalent Israeli perception that Evangelicals only support us because of obvious Christian motives – to hasten the coming of Christ. Evans clarifies that Evangelicals operate solely on the directive in the Genesis verse. He says, “They see it as a blessing of God. We bless God’s people and He will bless us.”

Evans reminds me that the museum is only the first part of his initiative, and that in the future he plans to build a Christian research center as well.

Q: So, back to Trump. Now that he has fulfilled his campaign promise on Jerusalem, he might start pressuring Israel. How will that affect your support?

Q: Do you think he will actually relocate the U.S. Embassy to Jerusalem by the end of 2019?

“I know it is going to move. I have access to information I cannot divulge. I am well aware of all the details on the matter. It is going to be wonderful. He is going to do it. I am not speaking for the administration, but I can tell you this: I believe the future is going to be very bright for Israel.”