‘Thanks to Sovereignty Movement, sovereignty is within grasp’ 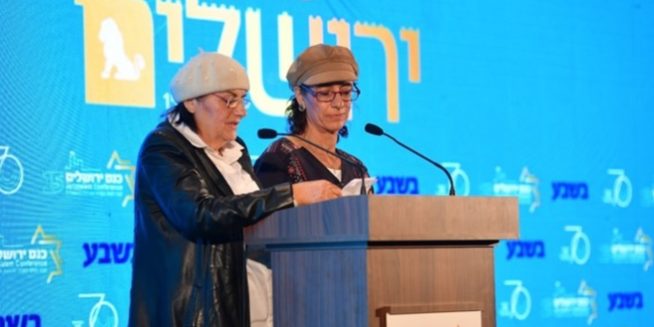 Sovereignty Movement heads Yehudit Katsover and Nadia Matars unveiled at the Jerusalem Conference this week a short original film surveying the five decades of conflict between Israel’s right and left.

The conflict has prevailed in Israel since the Six Day War, when Israel won Judea, Samaria, and the Golan Heights.

The film, which combines historical documentation with animation, presents the right and left as chess pieces. While the right takes steps in settlement and protest demonstrations, the left determines political facts on the ground, the crowning glory of which is the Oslo Accords. The revolution in consciousness is accompanied by the sovereignty process’ increased momentum and the collapse of the idea of dividing the Land of Israel and establishing a terror state in its heart.

In their speech, Katsover and Matar noted that there will be ups and downs during the process of applying sovereignty, the process has recently gained momentum, as well as broad consensus among the Israeli public and leadership.

The two noted that “this entire process would not have happened without the people in the field. If we return for a moment to the chess board, the bishop and the knight, the rook and even the queen, would not have made their moves without the first steps of the simple pawns. These are the rules of chess and this is how it is in reality.”

“Today, MKs, ministers and leaders are calling for the application of sovereignty because of the tailwind provided by the people with conferences, the journal, articles, vigils, billboards, flyers and stickers. Each small step has had a part in this revolution; we can and we must continue to take these steps.”

“Within days,” they promised, “we will push forward in the task that is incumbent upon each and every one of us, simple citizens and elected representatives alike. We, the citizens, have the task of continuing to encourage and support the leadership, which must deal with complex international pressures and is confronted by tenacious leftist elements that are loaded with foreign money; media that are still, for the most part, hostile to the idea; and a justice system in need of serious repair. We are up against all of these things with a lot of love for the Land of Israel in our hearts!”

“The fact that Israeli Prime Minister Binyain Netanyahu relates to the matter of sovereignty, and the fact that the American administration has been urged to respond to the discourse of sovereignty in Israel, indicate the necessity for additional public pressure in order to bring the implementation of the vision of sovereignty to political resolution,” the two said.

YESHA Council Deputy Head Yigal Dilmoni said, “Yehudit and Nadia’s important work over the years has been extremely influential. Thanks to them, sovereignty is now within grasp, and together with other good people like former MK Orit Struk, our shared dream will be realized.”

After their speech, Katsover and Matar awarded three Sovereignty Prizes to three public figures who have left their mark on the ideological and practical struggle to promote the vision of Israeli sovereignty in Judea and Samaria.

The three honored were Rav Benny Elon, z”l (received by his widow, authoress Amona Elon), Minister Haim Katz as chairman of the Likud Central Committee and director of the Land of Israel Lobby in Knesset, former MK Orit Struk.

Category: Judea and SamariaBy The Jerusalem ConnectionFebruary 15, 2018Leave a comment