Iran Is Playing With Fire in Syria 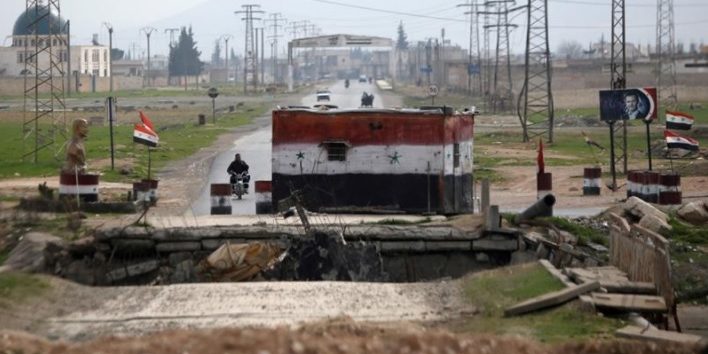 With the Syrian rebels on the run and the regime of Syrian President Bashar al-Assad gaining momentum, Iran is seeking to rewrite the “rules of the game” governing Israel’s actions in Syria. Last weekend’s clashes on Israel’s northern border occurred within this context. An Iranian drone breached Israeli airspace, Israel retaliated by bombing multiple targets deep in Syrian territory, and Syria then shot down an Israeli fighter jet.

Before last Saturday, Israel had established an expectation that its strikes on Iranian-Hezbollah weapons convoys and production facilities in Syria would not be met with an effective military response; Syria and Hezbollah couldn’t afford war with Israel, nor did they have the capabilities to seriously retaliate. This state of affairs was obviously disruptive for Iranian designs in the region and a bitter pill for the Assad regime to swallow.

By launching a sophisticated unmanned aerial vehicle into Israeli airspace on Saturday, Iran set off a chain reaction, which led the Israeli Air Force to strike Iranian and Assad regime positions in Syria, including the Iranian command center from which the drone was being remotely piloted. This gave the Assad regime an opportunity to set a new precedent by firing on Israeli jets over Israeli territory, downing an Israeli F-16, and provoking further Israeli Air Force strikes on Syrian targets.

Because it was the first time in over three decades that an Israeli jet was brought down by enemy fire, the immediate response by some analysts was to declare that the conflict in the region had entered a “new strategic phase.” The secretary of Iran’s Supreme National Security Council said, “The era of hit and run is over,” in reference to Israeli airstrikes on Syrian soil. Even the Israeli news site Walla made the foreboding prediction that this was a sign of ominous things to come along Israel’s northern front.

They are wrong. The loss of one Israeli jet should not be exaggerated; it is not a watershed moment that will alter the strategic balance in the Middle East. After all, the Syrians and Russians have lost numerous aircraft over the course of the civil war in Syria (including recently), and that has hardly ushered in an era in which they do not control the skies over their respective areas of influence.

When considering air superiority, a single case does not change the strategic balance, as the calculations are about averages, not individual instances. By this metric, because Israel’s enemies have succeeded in bringing down only a single plane over the past 30 years despite that fact that it has launched over 100 strikes in Syria since the start of the civil war and destroyed the Assad regime’s nuclear reactor in 2007, according to the New Yorker, there is little basis for questioning Israel’s air superiority.

To demonstrate that the “rules” had not changed, Israel was quick to re-establish its right to strike immediately following the downing of the F-16. The only way to reaffirm that right is to exercise it. By doing so, the Israeli Air Force took a risk that its pilots would face more anti-aircraft fire, but the lack of resistance it appears to have encountered may suggest that the Syrian military was unwilling to risk escalating the clashes into a wider conflict that it did not want and could not win.

In its far-reaching retaliatory raid on a dozen Syrian and Iranian targets, Israel sought to make clear there would be a cost if Assad and his Iranian allies challenged the “rules” again in the near future. By causing heavy damage to Syrian defense infrastructure but not going “all the way” and completely decimating all air defense units, Israel is well positioned to deter future incursions into its airspace. It demonstrated that it could demolish all Syrian forces if necessary to establish complete air superiority, but by not doing so gave Damascus an incentive to avoid future conflict.

The first-ever direct strikes on manned Iranian fixtures in Syria also demonstrated what may become an important component of Israeli strategy to deter Iran in Syria: Iranian forces stationed in Damascus are 800 miles from Tehran and only a few dozen miles from Israel, which leaves them extremely vulnerable to Israeli aerial attacks. Thus, while it is uncomfortable and undesirable for Israel to have an Iranian presence next door, it does also present some opportunities in the sense that Iran is far more exposed and, if Israeli leaders deem it necessary, Israel can attack Iran without entering Iranian territory.Israel can attack Iran without entering Iranian territory.

After Israel’s counterstrike, the Iranian-led axis appears to have backed down. Russia’s statement urging “all sides to exercise restraint” indicated that it was not supportive of Iran’s provocations that might put the Kremlin’s “project” of saving the Assad regime at risk. The Assad regime barely survived seven years of war against the Syrian rebels, and so it stands little chance of holding up against an advanced and professional military like Israel’s.

Considering that the Syrian regime is in tatters, Assad is probably more keen on rebuilding his decimated country than on bearing the brunt of Israeli attacks launched in response to Iranian provocations. Hezbollah may be arming itself with advanced weaponry, but it is not interested in fighting another devastating conflict with Israel that could spread to Lebanon. Finally, the Iranian people’s protests against their government’s economic mismanagement at home and adventurism abroad indicate that the regime should be wary of increasing its commitments in Syria.