Report: Before Strikes, Netanyahu Warned Iran Israel Would Respond With Force to Provocations 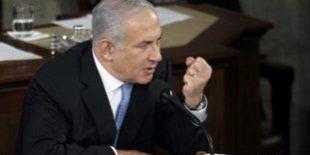 Prime Minister Benjamin Netanyahu is said to have warned Iran via European leaders in recent weeks that he would respond militarily to any provocation, an Israeli TV report said Sunday.

Prior to Israel’s downing of an Iranian drone Saturday in the country’s north and the ensuing strikes in Syria, Netanyahu spoke with German Chancellor Angela Merkel, French President Emanuel Macron and UK Prime Minister Theresa May and instructed them to relay a message to Tehran that Israel will take whatever steps necessary against Iranian aggression, Channel 10 news reported.

Netanyahu said that while he favored a diplomatic solution to the Iran question, Israel would resort to military force if it needed to.

“We raised the issue with Rouhani’s people and told them that it was important for us to convey the information because perhaps President Rouhani is not aware of everything that the Revolutionary Guards are doing in Syria and Lebanon,” one European official was quoted as saying in the report.

There was no response from the Iranians, the official stated.

Netanyahu was also said to have warned European leaders about a newly constructed ballistic missile factory in Lebanon, a claim that was met with skepticism, the unnamed diplomats told Channel 10.

Last month, Netanyahu warned Russian President Vladimir Putin in Moscow that if Iran continues to entrench itself in Syria and turns Lebanon into a “missile factory” Israel will “stop it.”

“The question is: Does Iran entrench itself in Syria, or will this process be stopped? If it doesn’t stop by itself, we will stop it,” Netanyahu told Israeli reporters Monday on a conference call following his meeting with the Russian president.

“We also spoke about Lebanon, which is becoming a factory for precision-guided missiles that threaten Israel. These missiles pose a grave threat to Israel, and we cannot accept this threat,” he added.

Netanyahu’s remarks on Lebanon came as the Defense Ministry boosted its campaign to prevent the production of missile factories in that country.

Defense Minister Avigdor Liberman said Israel was using “all its options,” including “political leverage,” to stop the production of Iranian precision missiles.

The Iranian drone entered Israeli airspace and remained there for a minute and a half before being downed by a combat helicopter. Israel launched airstrikes on 12 Syrian and Iranian targets in Syria, including three air-defense batteries and four Iranian targets such as the control center that launched the drone, marking what IAF Air Staff Commander Brig. Gen. Tomer Bar said was “the biggest and most significant attack the air force has conducted against Syrian air defenses since Operation Peace for the Galilee” in 1982 during the First Lebanon War.

Syria responded with a barrage of missiles that resulted in the downing of an Israeli F-16 in which two pilots were injured, one seriously and another lightly. They were treated at Rambam Medical Center in Haifa. On Sunday, Prime Minister Benjamin Netanyahu said that both were showing signs of improvement.

“We made it unequivocally clear to everyone that our rules of action have not changed one bit; we will continue to strike at every attempt to strike at us. This has been our policy and it will remain our policy,” he added.

Israel said the drone infiltration was a “severe and irregular violation of Israeli sovereignty” and warned of further military action against Iran.

“This is a serious Iranian attack on Israeli territory. Iran is dragging the region into an adventure in which it doesn’t know how it will end,” Israel’s chief military spokesman Brig. Gen. Ronen Manelis said in a statement. “Whoever is responsible for this incident is the one who will pay the price.”