Former US Senator Lieberman: ‘Israel’s Destiny is to Become a Light Unto the Nations’ 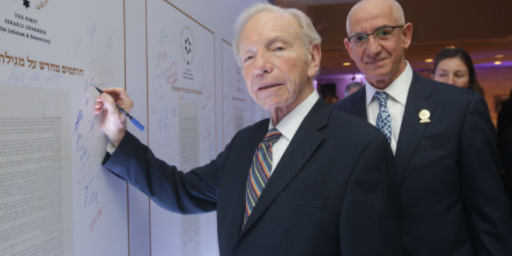 “Israel’s destiny is to be a light unto the nations,” according to former U.S. Senator Joseph Lieberman who was featured on Sunday evening at the first Israeli Congress on Judaism and Democracy.

“The destiny of the country, being a Jewish State, has got to mean more than a country in which the majority of the people are ethnically Jewish,” Liberman told Breaking Israel News in an exclusive interview.

Lieberman, who is Jewish, believes that part of being a “light unto the nations” involves making certain that non-Jewish groups within the Jewish state are never marginalized.

“The country will not achieve its potential and destiny if one sector is prioritized,’” Lieberman had told gala participants.

“The Torah says we should remember that we were strangers in Egypt, and this led Jews to be social justice fighters for outsiders,” Lieberman elaborated to Breaking Israel News.

“You too must befriend the stranger, for you were strangers in the land of Egypt.” (Deuteronomy 10:19)