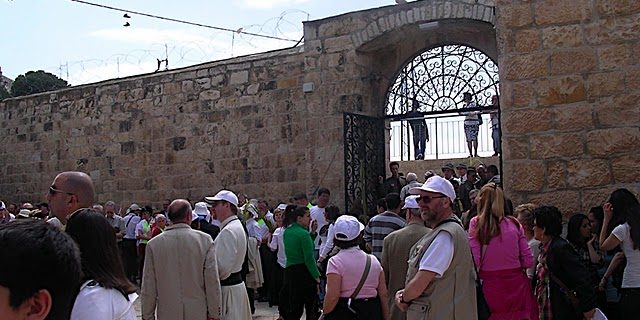 Palestinian leaders are not simply infuriated by President Trump’s decision to recognize Jerusalem as Israel’s capital.

They are also incensed by what they perceive as an anti-Palestinian theology held by Evangelical Christians generally, and specifically by Evangelicals close to Mr. Trump, including Vice President Mike Pence.

Palestinian President Mahmoud Abbas refused to meet with Mr. Pence during his recent visit, and gave a blistering speech denying Jews have any biblical or historical claim to the land.

“Israel is a colonial project that has nothing to do with Judaism, but rather used by the Jews as a tool under the slogan of the ‘Promised Land,’” said Mr. Abbas.

Saeb Erekat, the chief Palestinian negotiator, blasted Mr. Pence’s “messianic discourse” in the Knesset as a “gift to the extremists.”

Hanan Ashrawi, the Palestinian legislator, also excoriated Mr. Pence, saying that in his Knesset speech he “brought to bear his ideological, fundamentalist, literalist interpretation of the Bible in order to punish the Palestinians and reward the aggressors, the Israeli occupiers.”

As an Evangelical, a dual US-Israeli citizen and an author who has spent the past several decades building friendships with Muslim and Christian Arabs from Morocco to Iraq, I would like to respectfully correct some misconceptions.

First, Evangelicals who take the Bible literally are required to believe that God loves both Israelis and Palestinians, and that we, too, are commanded to love both.

Second, Evangelicals who take the Bible literally are required to be peace-makers.

Jesus said, “Blessed are the peacemakers, for they will be called the sons of God.” (Matthew 5:9). The Apostle Paul added, “If it is possible, as far as it depends on you, live at peace with everyone.” (Romans 12:18)

These are not suggestions. To disobey these commands is to sin.

Third, a literal interpretation of the Bible requires Evangelicals to fight injustice and care for those who are suffering.

Micah 6:8 says, “He has shown thee, O man, what is good; and what does the Lord require of thee but to do justice, and to love mercy and to walk humbly with your God?”

Proverbs 31:8-9 says, “Speak up for those who cannot speak for themselves… defend the rights of the poor and needy.”

Jesus inaugurated his public ministry by citing the prophet Isaiah. “The Spirit of the Lord is upon Me, because He anointed Me to preach the gospel to the poor. He has sent Me to proclaim release to the captives, and recovery of sight to the blind, to free those who are oppressed, to proclaim the favorable year of the Lord.” (Matthew 4:18-19)

Then he practiced what he preached, feeding the hungry, healing the sick, honoring women, denouncing religious extremism and hypocrisy, and preaching a message of forgiveness and hope not only to those in the Land of Israel but in Lebanon, Syria and Jordan.

Is every Evangelical who loves Israel faithfully loving Palestinians and countering injustices committed against them? Sadly, no. Nor are all Evangelicals who have a special compassion for Palestinians faithfully loving Israel and fighting injustices done against Jewish people. Too many take an “either/or” approach to the Arab-Israeli conflict, when the Scriptures teach us to love “both/and.”

Still, as I crisscross the region, I see many Evangelicals endeavoring to be ambassadors of peace, reconciliation and unity. May their tribe increase.

I commend to Palestinians leaders a recent poll conducted by LifeWay Research and commissioned by the Alliance For The Peace of Jerusalem, a new organization I helped launch with a group of respected American theologians, including Dr. Mitch Glaser and Dr. Darrell Bock.

* Eight in 10 believe the Abrahamic Covenant was an unconditional promise God made to the Jewish people for all time. Only 5% disagree.

* Eight in 10 believe the rebirth of the State of Israel was the fulfillment of Bible prophecy. Only 20% think it was merely an interesting geopolitical event.

* Nearly eight in 10 (76%) believe Christians should support the Jewish people’s right to live in the sovereign State of Israel.

Yet the survey also revealed far more compassion for Palestinians by American Evangelicals than may have been previously understood.

* 59% believe Christians should do more to love and care for the Palestinian people (66% of younger Evangelicals believe this).

* 73% expressed concern for the safety of Christians in areas controlled by the Palestinian Authority.

* 41% agreed with the statement: “Jewish people have a biblical right to the land of Israel, but also have a responsibility to share the land with Palestinian Arabs.” Only 28% disagreed, while 31% said they weren’t sure.

Evangelicals – 60 million in the US and 600 million worldwide – are not monolithic. We have a range of views on various theological matters, including how to properly interpret the Scriptures regarding God’s plan for Israel.

Yet one thing is certain: Evangelicals don’t want to “punish” Palestinians. To the contrary, we want them to be able to raise their children in peace and security, side by side with Israelis – free from violence and corruption; free to travel and speak their minds and worship as they please; free to build a booming economy and world-class universities and the technologies of the future; free to trade with anyone they wish; and free to welcome tourists and pilgrims to the Holy Land from all over the world.

It is difficult to see how any of this happens until a fair and final treaty is signed. Many of us pray, therefore, that Palestinian leaders will soon return to the negotiating table, lest the needless suffering of their people extend for yet another generation.

Joel C. Rosenberg is a New York Times best-selling author and one of the founders of the Alliance for the Peace of Jerusalem. He recently led a delegation of American Evangelical Christians to meet with President Abdel Fattah el-Sisi in Cairo and King Abdullah II in Amman. He lives with his wife and sons in Jerusalem.