Jordan’s King Abdullah: No Peace Process or Peace Solution Without the U.S. 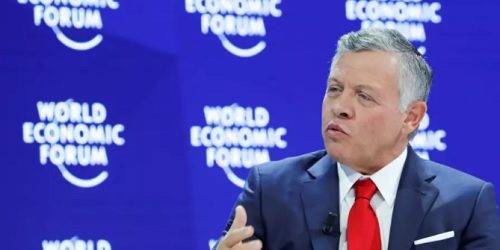 King Abdullah of Jordan said that there will not be a peaceful solution to the Israeli-Palestinian conflict without the United States, despite US President Donald Trump’s controversial decision to recognize Jerusalem as the capital of Israel.

“We cannot have a peace process or peace solution without the role of the United States,” said the King of Jordan at the World Economic Forum in Davos, Switzerland on Thursday.

Abdullah said that Arab leaders must “reserve judgment” on the Israeli-Palestinian conflict because the Americans have not yet come out with their peace plan.

Although he agreed that US President Donald Trump’s decision to recognize Jerusalem as the capital of Israel and move the US embassy to the holy city is a “complication for Jordan,” he remained open to the possibility of peace talks in the region.

“The subject of Jerusalem has to be part of a comprehensive solution for Israel and the Palestinians,” said Abdullah.

According to Abdullah, the outcome of embassy move “comes back to how we see Jerusalem in the future.” The city is as important to Christians as it is to Muslims. “It could be a tremendous city or it can lead to violence the likes of which we’ve never seen before.”

Abdullah claimed that Trump’s decision has created backlash for the Palestinians, who now feel that the United States is not a viable partner in the peace process. But the Palestinians are now turning to Europe, which shows that they are still interested in finding a peaceful solution.

Abdullah reiterated that he will reserve judgment until he sees the US peace plan, but he admitted his “skepticism.” The challenge, he said, is that Americans must “give something very good to the Palestinians.”

When asked if he believed a one-state solution was possible, Abdullah, who has long supported a two-state solution, replied, “I can’t envisage a one-state solution that can be acceptable” due to the current political and social environment in Israel. Not only are the Palestinians second class citizens in the Jewish State, Arabs and Christians are as well, he said.

He remained optimistic about the future of the peace process. “We’ve been at this for a while and looking at this always as a glass half full. We have to give the Americans the benefit of the doubt.”