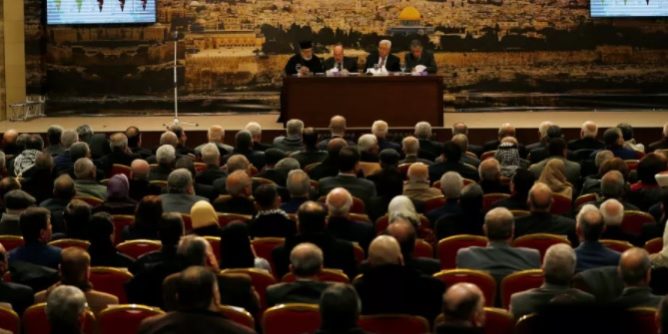 Israeli officials on Monday leveled harsh criticism at Palestinian Authority President Mahmoud Abbas for his speech on Sunday in which he railed against U.S. President Donald Trump, rebuking him for his Dec. 6 recognition of Jerusalem as Israel’s capital and for “mistreating” the Palestinians.

Prime Minister Benjamin Netanyahu, who is on a state visit to India, said, “Abbas has shown his true colors. He has torn off his mask and made clear the simple truth that I have been trying to expose for many years: The root of the Israeli-Palestinian conflict lies with the Palestinians’ fundamental and constant refusal to recognize a Jewish state in any borders.”

Abbas’ speech “serves our political goals more than anything else, because we can make the elementary claim that unless the Palestinian policy, as expressed by Abbas, changes, there can be no progress,” Netanyahu said.

“He exposed his true position and did a great service both to the truth and to Israeli diplomacy. Abbas is afraid of an American initiative. He wants to exclude the Americans from mediating , but there is no one else. The Palestinian Authority has been coddled for too long by international bodies that were always quick to hide the truth and placate.”

A senior official with Netanyahu’s entourage to India described Abbas’ speech as “that of a man who has nothing left to lose.”

Abbas “is digging his own grave,” the official said. “He is systematically losing legitimacy around the world, and this happens every time he makes such radical statements. A growing number of international officials are sending Israel the message that they want nothing to do with him and that they understand he is the real peace rejectionist.”

President Reuven Rivlin said the comments brought to mind Abbas’ doctoral dissertation, in which he challenged the number of Jewish victims of the Holocaust and claimed Zionists had collaborated with Nazis.

“He reverted back to the ideas he expressed decades ago, and they were no less terrible then,” Rivlin said Monday. “To say Israel is the result of a Western conspiracy to settle Jews in land belonging to Arab populations? To say that the Jewish people have no link to the Land of Israel? He forgot many things, and said exactly the things that led him to be accused years ago of anti-Semitism and Holocaust denial.”

Defense Minister Avigdor Lieberman said Abbas had “lost his senses” and had given up on the prospect of peace negotiations in favor of open confrontation with both Israel and the United States.

“It is clear that Abbas doesn’t want peace or any agreement and that from his perspective, Trump’s declaration was just an excuse to shun direct negotiations. He may speak against terrorism, but he is also terrorism’s biggest sponsor. He rewards terrorists according to the gravity of the attack they perpetrate,” Lieberman said.

In a statement issued following Abbas’ speech, the European Union said its position on the Israeli-Palestinian conflict remains “based on the Oslo Accords.”

“A negotiated two-state solution which fulfills the aspirations of both sides, Israel and Palestine, is the only realistic way of bringing the lasting peace and security that both Israelis and Palestinians deserve,” European Commission spokeswoman Maja Kocijancic told reporters in Brussels.

“For years they made concessions without receiving anything in return. We constantly hear that the U.S. is about to unveil an important deal that would satisfy all sides. We have not seen this kind of document,” Lavrov said.

Palestinian officials on Monday tried to downplay the shock caused by Abbas’ use of the phrase “ikhrab beitak.”

“This phrase is common in Palestinian slang. It was not a curse and no one meant any offense,” senior Fatah official Ziad Abuzayyad said.

Former Arab Democratic Party MK Talab El-Sana, who advises Abbas on issues pertaining to Israeli society, stressed that the Palestinian president “did not mean to curse or humiliate Trump. His words were directed at the hearts of the Palestinian people and the remark on Trump’s house was sarcastic.”

Not all in Ramallah agreed with Abbas’ fiery rhetoric.

A senior Palestinian official, who boycotted the conference where Abbas spoke, told Israel Hayom that “it was embarrassing to see Abbas and hear the style in which his speech was given.

“Abbas is leading us toward the abyss. What will he do when the money from the U.S. stops coming in? The Arab countries have yet to transfer 80% of the money they pledged and the Palestinian Authority can function economically only thanks to American aid and tax revenues that Israel collects on its behalf.”