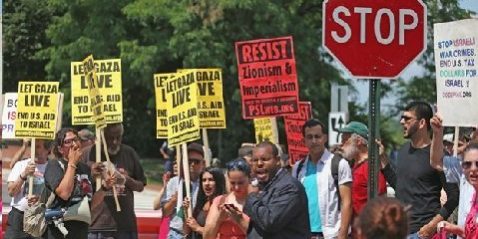 Israel published on Sunday a blacklist of Boycott, Divestment and Sanctions (BDS) organizations whose members and leaders will be prevented from entering the country – among them a French organization that receives taxpayer funds from state bodies, a British advocacy group whose patrons include the leader of the opposition Labour Party, and a South African solidarity campaign that regularly features antisemitic slogans and images in its propaganda.

“We have moved from defense to attack,” Israel’s Strategic Affairs Minister Gilad Erdan announced in a statement that listed 20 groups whose entry will now be barred by the Interior Ministry. “Boycott organizations need to know that Israel will act against them and will not allow to enter its territory in order to harm its citizens.”

Other than BDS South Africa and BDS Chile, the groups named on the list are located in Europe and North America. One of them – the European Coordination of Committees and Associations for Palestine (ECCP) – acts as a co-ordinator for more than 40 pro-BDS groups around Europe, including some larger associations that are specified separately on the Israeli list.

The American groups on the list include the American Friends Service Committee, Students for Justice in Palestine and Jewish Voice for Peace – the latter an overtly anti-Zionist group that operates outside the formal structures of the Jewish community, with financial support from the US progressive Rockefeller Brothers Fund.

Most of the groups named have long-established records of support for the Palestinian cause, and several of them – notably BDS South Africa – enjoy the support of influential elements in both government and public life, as well as public funds.

The Association France Palestine Solidarité (AFPS), founded in 2001, has received over $600,000 from the French taxpayer during the last five years alone, according to the Israeli research and advocacy organization NGO Monitor. Despite a French High Court ruling in October 2016 that the BDS campaign incites hatred and discrimination, the AFPS maintains a website page promoting the boycott of Israel.

BDS South Africa, meanwhile, has a reputation for engaging in explicit antisemitism – disrupting a South African Zionist Federation event in March 2015 with antisemitic chants that included “Jews do not belong in South Africa.” A few months previously, BDS activists went so far as to place a severed pigs head in the kosher food section of a Woolworth’s store in Cape Town. Yet BDS South Africa and its broader campaign continues to enjoy the patronage of the ruling African National Congress, which voted at its national conference last month to downgrade the South African Embassy in Israel to the status of a “liaison office,” as a “practical expression of our support to the oppressed people of Palestine.”

The barring of the Palestine Solidarity Campaign (PSC) in the UK could theoretically extend to Jeremy Corbyn – the leader of the opposition Labour Party and a patron of the group, one of the major vehicles for BDS activism in the UK. Another PSC patron is Baroness Jenny Tonge, who earned a suspension from the Liberal Democrat party for making antisemitic comments in 2012. A familiar bête noire in the British Jewish community, Tonge’s provocations have included the hosting of a Palestine solidarity meeting at the House of Lords in October 2016 where Israel was compared to ISIS and Jews were blamed for the Nazi Holocaust.

In one published reaction by a BDS advocate to the new Israeli restrictions, the head of Jewish Voice for Peace in the US emphasized her family connections to Israel.

Rebecca Vilkomerson, who leads the group, said in an op-ed for Haaretz that she was “personally feeling the pain of exclusion for the first time from a place that I am bound to by deep ties.”

“Despite the fact that my grandparents are buried there, that my aging in-laws still live there, and my extensive ties of friendship and family, my support for the BDS movement for Palestinian rights now excludes me from Israel,” she said.

The head of the Palestinian BDS National Committee slammed the publication of the list “as consistent with the Israeli government’s ongoing efforts to suppress the BDS movement for Palestinian rights.”

“Support for the BDS movement has been growing around the globe in recent years, as more and more people recognize the brutal reality of Israel’s apartheid regime and nearly 50-year-old military occupation of Palestinian lands,” committee head Mahmoud Nawajaa said in a statement.