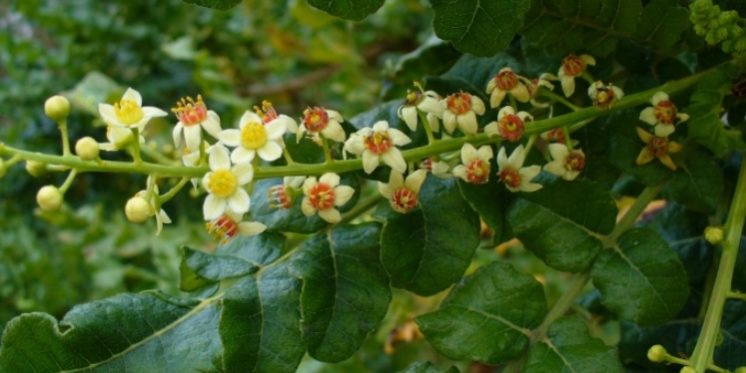 By Reuters and Israel Hayom Staff—

The aromatic plants bestowed on the infant Jesus are being cultivated by an Israeli entrepreneur who aims to transform the gifts of the Christmas story into therapeutic balms and incense.

Manger aside, the baby Jesus may have been swaddled in pleasant and pricey fragrances, thanks to the presents that the Christian Bible says were given to him by the Wise Men of the East.

The frankincense (pungent and sweet) and myrrh (sharp and piney) recounted in the Gospel of St. Matthew are being grown by Guy Erlich, a businessman who hopes to revive the rare plants’ use for commercial ends.

And what about gold, the third gift brought by the Magi according to the New Testament story?

Some Christians believe this refers to the precious amber resin of the Balsam of Gilead, an aromatic mix resembling citrus and cinnamon that Erlich also cultivates on his farm in the Judean desert.

“I see myself as a modern Magus,” he told Reuters.

“I decided to focus on plants that no one else in the world grows. Since those plants, those medical plants of the Bible were in medical use for so many years, there must be something about them and it is our duty to look for it.”

Dried and crushed resins of all three plants smolder in a nearby censer, filling the air with heavenly smells of fruity freshness.

Such smoke was used for religious rites and fumigation in ancient times. The plants have also been known to produce balms, poultices and perfumes. The Balsam of Gilead resin, Erlich says, was used as the oil with which biblical kings were anointed.

Archaeologists doubt the claim that it could be identified as the Magi’s gold and attribute the origins of this theory to Christian evangelical circles.

But Christianity scholar Yisca Harani explains it may be plausible in at least a literary way, if there was a translation inaccuracy of the word “gold.”

Professor Shimshon Ben-Yehoshua, from the Volcani Agricultural Research Center and the Hebrew University’s Faculty of Agriculture, says Erlich’s plants are most likely the same as those from ancient times.

“For the frankincense and myrrh which I believe are similar to the ones that were growing in the past in Israel, those are many species but I believe that the species he grew has the desirable qualities,” he told Reuters.

In addition to Christians interested in sampling the scents, Erlich says he has been fielding inquiries from pious Jews who thrill at the prospect of recreating the incenses that were burnt in their Roman-era Temple in Jerusalem.

“My plants are sacred to all religions,” he said. “Now they can be a uniting factor. They can be a common ground. They can connect people.”