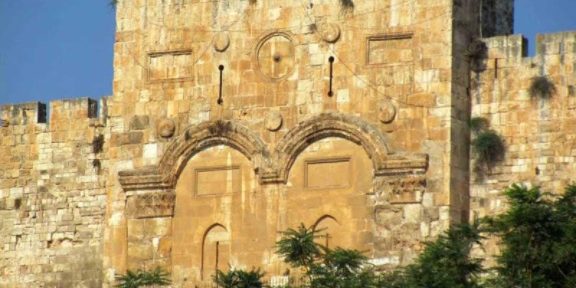 While Muslims jeer, Israelis cheer President Trump’s Jerusalem declaration, prompting Jewish religious activists to suggest building the Third Temple is closer to reality than ever before.

“What he did … was an enormous step in bringing the Temple,” said Asaf Fried, official spokesman for the United Temple Movement, an association of organizations working towards making the Third Temple a reality.

He added, “This necessarily had to come from a non-Jew in order to bring them into the process, so they will be able to take their part in the Temple.”

Fried sees Trump’s role similar to the one played by Cyrus, the Persian king who ended the Babylonian exile and helped build the Second Jewish Temple.

“There have been amazing advances towards bringing the Temple this year. It was clear that Trump was part of that process, guided by Hashem (God),” Fried declared.

He is hardly alone in his jubilation about the possibilities of rebuilding a Temple last destroyed in A.D. 70 – 1,948 years ago.

“The prophets’ words of prophecy are coming forth from the Bible and becoming facts right before our eyes,” said Likud lawmaker and prominent Temple Mount movement figure Yehuda Glick.

Quoting from the opening words of the book of Lamentations, in a reference to Jerusalem, Glick noted that once Jeremiah had wept, crying “How deserted lies the city, once so full of people! How like a widow is she, who once was great among the nations!”

But the rise of the state of Israel, coupled with Trump’s declaration, have now changed all that, Glick suggests: “So, Mister Jeremiah, I’m sending you a WhatsApp: ‘Jerusalem is no longer alone like a widow. Jerusalem is recognized as the capital of the Jewish People.’”

“One year ago, the Sanhedrin called on Trump to build the Temple as Cyrus did 2,000 years ago,” Weiss said. “He has clearly moved in this direction but there is still a long way to go and many pitfalls that could prevent that from happening. Trump is facing enormous political pressures. The borders of Jerusalem are still open to negotiation. The Temple Mount is still not a settled issue and the United Nations is working hard at trying to convince the world the Jews have no place there. If Trump is to succeed, the Jews have to come together in unity in order for him to remain strong.”

Yakov Hayman, the United Temple Movement chairman, also saw Trump’s statement as part of a major shift in modern history for Israel and the Jewish people.

He said, “1917 was the Balfour Declaration establishing Israel for the nations, 2017 was Trump’s declaration.”

“When Jews and non-Jews go up en masse, the Temple is inevitable,” Hayman added. “The people of Israel are returning to their roots while simultaneously the non-Jews of the world are realizing the authenticity of our claim to the Temple Mount and our right to build a Jewish Temple as a House of Prayer for All Nations. These processes are codependent. It depends on the Jews, our actions, but the non-Jews are an essential part of the process. Our task is to act as priests to make the whole world holy,” Hayman said, citing verse 19:6 in the Book of Exodus: “And ye shall be unto me a kingdom of priests, and an holy nation. These are the words which thou shalt speak unto the children of Israel.”

He added: “That will only happen in a Temple in Jerusalem,” he emphasized. “The next step, the most important step, must be taken by the Jews. We need to begin going up to the Temple Mount is massive numbers. Once we do that, the Temple is the next inevitable step.”

Glick sad: “Just as I’ve said that the State of Israel is a miracle, one of the greatest of miracles, it seems to me that the fact that hundreds of millions of people, Christians, recognize Israel, is another stage in the miracle.”

“There is something very special and holy in Trump,” added Hayman. “Sometimes, he appears coarse and not connected to religion, but every time he addresses the nation he speaks about God. Last night, he said his motivation for recognizing Jerusalem was because it was the right thing to do. That is precisely how a leader guided by God should speak.”