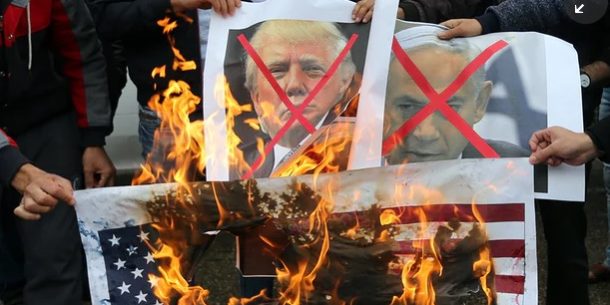 Hours before an expected announcement by U.S. President Donald Trump officially recognizing Jerusalem as Israel’s capital and declaring a clear intent to relocate the American embassy there, the Israeli defense establishment braced for potential Palestinian backlash.

Israeli defense officials did not take lightly Palestinian threats to stage “day of rage” demonstrations in response to the American announcement, nor did they dismiss Jordanian warnings of regional destabilization as a result of the American move.

The head of the Palestinian Education Ministry issued instructions on Tuesday to institute day of rage activities at Palestinian schools, including classes on the Jerusalem issue and protests on school grounds. Hamas, the rulers of the Gaza Strip, also called for a day of rage in the territory and rival Palestinian faction Fatah prepared for similar demonstrations in the West Bank.

However, a senior Fatah official was quoted as saying that “the Palestinian Authority plans to stage rage demonstrations and protest . But we have no intention of walking away or engaging in head-on clashes with Israel, like in the Second Intifada.”

The IDF stopped short of declaring a raised level of alert in the West Bank and refused to detail its operational plans there. However, bracing for a potentially violent clash, the Central Command clarified its instructions to troops deployed there, and there was no doubt that the military was preparing for a possible confrontation.

The IDF has a contingency plan in place, but it has not yet been implemented. It is well documented that tensions surrounding Jerusalem and the Temple Mount have a tendency to erupt into violence. But it is important to keep in mind that the most recent eruption, surrounding Israel’s installation of security measures at the entrance to the Temple Mount last summer, was fairly quickly contained and resulted in a relatively low casualty count.

However, the IDF is not taking any chances and therefore, troops have received special instructions for the event of violent outbursts. The defense establishment hopes that Israel will be able to maintain a degree of calm by preparing in the appropriate manner.